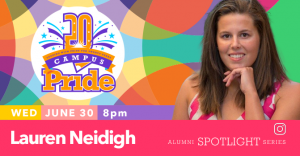 Lauren Neidigh was a college swimmer at the Universities of Florida and Arizona. In 2012, Lauren competed in the Olympic Trials for the Florida Gators and Bolles School Sharks. She also scored at the SEC Championships and the Pac-12 Championships.

In 2014, she came out as a junior in college. Lauren then got involved with LGBTQ activism through organizations like Campus Pride and Outsports. Also, she spoke at the Nike LGBT Youth Summit and received a Campus Pride Voice and Action award in 2015.

Lauren worked as the Director of Social Media and Digital Initiatives for GO! Athletes and founded GO! Space. Today, she continues to work with GO! Space to connect LGBTQ student-athletes, coaches and allies across the United States. 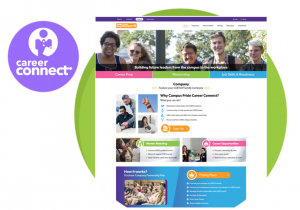 Campus Pride is celebrating its 20-year anniversary, and we are developing a new platform called Career Connect to help connect college students to mentorship and career opportunities. All Give OUT Day donations will help pay for the Career Connect platform being released later this year. Your donation will help LGBTQ students like Neidigh achieve their goals and make a difference in their communities.

“Give OUT Day is the biggest fundraising day of the year for Campus Pride,” says Campus Pride Executive Director Shane Windmeyer, “Your donations fund all of the amazing programs and resources that support LGBTQ young adult leaders like Lauren Neidigh.”