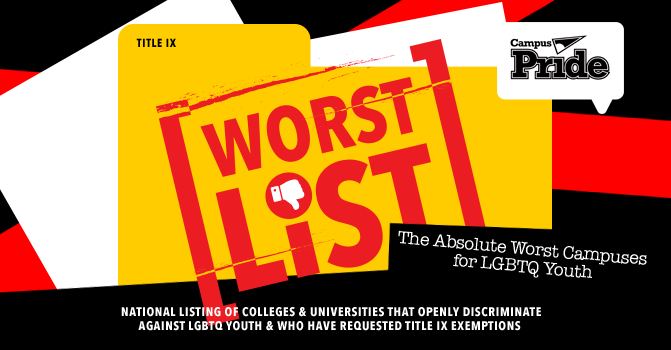 “LGBTQ young people face high rates of harassment and violence, especially our trans youth and LGBTQ youth of color. The schools on this list openly discriminate against LGBTQ youth and many of these schools have requested or received Title IX exemptions for no other purpose than to discriminate, expel and ban LGBTQ youth from campus,” said Shane Windmeyer, Executive Director of Campus Pride.

“Families and young people deserve to know that this list of schools are the worst for LGBTQ youth.  They are not loving, welcoming, safe spaces to live, learn and grow – and nobody wants to go to a college that openly discriminates against anyone.”

Originally this list was named the “Shame List” when it was first put online in 2015.  The name was changed in 2020 to the “Worst List” for LGBTQ youth.  The purpose of the list remains the same — “calling out the harmful and shameful acts” by college campuses discriminating openly through practice and policy against LGBTQ people.

On December 1, 2015, Campus Pride launched the national listing to bring attention to the colleges and universities who requested Title IX exemptions against LGBTQ students.  Campus Pride titled the list the “Shame List” for the purpose of calling out the harmful and shameful acts of religion-based prejudice and bigotry. The list named each institution who had requested or received a Title IX exemption to openly discriminate against LGBTQ youth. Under Title IX statutes, an educational institution that is “controlled by a religious organization” may apply for a Title IX exemption if it “would not be consistent with the religious tenets of such organization.”

Title IX exemptions were not public information at the time of the first listing and were subject to Freedom of Information Act requests.  Reporter Andy Birkey with The Column was the first to report “Dozens of Christian schools win Title IX waivers to ban LGBT students”.  The Human Rights Campaign (HRC)  issued a report on December 18, 2015 titled “Hidden Discrimination: Title IX Religious Exemptions Putting LGBT Students At Risk” and calling on the U.S. Department of Education to take action on the issue.  The HRC cited Campus Pride’s groundbreaking LGBTQ higher education research study from 2010 which speaks to the discrimination and harassment faced by LGBTQ youth.  The list has grown and changed in scope since then.  Due to recommendations by Campus Pride and the Human Rights Campaign, the U.S. Congressional members directed the Department of Education to begin posting the Title IX exemptions online (starting in late April 2016).

Find LGBTQ-friendly Colleges & Universities: Prospective students and families who are looking for LGBTQ-friendly campuses are encouraged to check out the Campus Pride Index for a free online search database.

REPORT IT: Report Bias & Hate, Find Help & Document, Prevent Future Incidents: Campus Pride encourages students to #ReportIt when they witness or experience discrimination at their college or university. Campus Pride can gather data to improve our work, provide assistance to LGBTQ students who wish to file complaints with the Office for Civil Rights in the Department of Education.

If you encounter bias and hate, please complete this Report It online form and encourage LGBTQ students and their peers to #ReportIt. It’s vital to remember that anyone who knows of a case of discrimination on their campus has the right to report.

How to File Discrimination Complaints: Students who find their campus on the Worst of the Worst List are encouraged to reach out to Campus Pride and consider filing a formal complaint with the U.S. Department of Education’s Office of Civil Rights.

The Worst List identifies the “absolute worst campuses for LGBTQ youth” in the United States. The colleges & universities listed have chosen to openly discriminate against LGBTQ youth and have requested Title IX exemptions to perpetuate the harms of religion-based bigotry.  The criterion to be the “absolute worst” campus includes either of the following: 1) Received and/or applied for a Title IX exemption to discriminate against LGBTQ youth and/or 2) Demonstrated past history and track record of anti-LGBTQ actions, programs and practices.  Campus Pride releases the list annually and updates regularly.