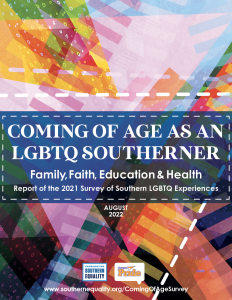 Coming of Age as an LGBTQ Southerner: Family, Faith, Education & Health, details the findings of the 2021 Survey of Southern LGBTQ Experiences, a survey of 4,186 LGBTQ people who live in the South.  This report covers new data about LGBTQ Southerners’ experiences with family, faith communities, school, and health.

The Report of the 2021 Survey of Southern LGBTQ Experiences is available below. Click here to read the full report.

This report was produced by the Campaign for Southern Equality and Campus Pride.

Campus Pride through it’s Out to Play Project is leading the way in collegiate sports.  The Campus Pride 2012 LGBTQ National College Athlete Report is the most comprehensive national collegiate research report sharing the experiences of nearly 400 self-identified LGBTQ athletes and providing necessary resources for further progress on LGBTQ issues in college athletics.

The State of Higher Education for LGBT People is the most comprehensive national research of its kind to date. The report documents experiences of nearly 6000 students, faculty, staff and administrators who identify as LGBTQQ at colleges and universities across the United States. Recommendations and findings from the national study provide the means for student activists, campus program planners and policy makers to implement strategic initiatives to address the needs and concerns of their LGBTQQ students and employees. 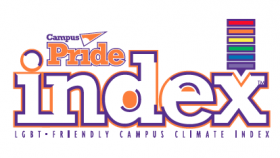 Campus Pride Index
is a vital tool for assisting campuses in learning ways to improve their LGBTQ campus life and ultimately shape the educational experience to be more inclusive, welcoming and respectful of LGBTQ and Ally people.The only online tool of its kind, the Index is in response to the increasing demand for resources to support campuses in assessing LGBTQ-Friendly policies, programs and practices. The index was developed by Campus Pride and is supported by the Q Research Institute for Higher Education and an advisory board of national LGBTQ researchers.

Experiences of LGBT People in Fraternities & Sororities: From 1960 to 2007

The Lambda 10 Project, an educational initiative of Campus Pride & its Q Research Institute for Higher Education, commissioned the first-ever national formal research exploring the LGBTQ experience within fraternities and sororities from 1960 to 2007. Experiences of LGBTQ People in Fraternities & Sororities: From 1960 to 2007 represents the largest national study to date and builds on the data from an informal assessment published in 1995.

Presentations based on the State of Higher Education for LGBT People:

Garvey, J., & Rankin, S. (April, 2012). Relationship between level of outness and campus experiences for LGBTQ undergraduate students. Presented at the Annual Meeting of the American Educational Research Association, Vancouver, BC. 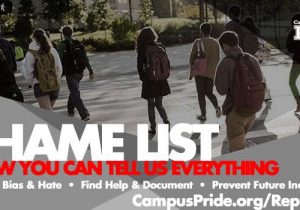 Campus Pride asks victims of bias, discrimination, and hate to “ReportIt: Now You Can ...
Read More →

Accustomed to Privilege: A Response to Biola University’s SB 1146 Opposition 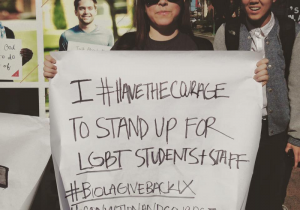 Hi, I am Romeo Jackson.  I am a senior at Northern Illinois University and returning from Washington, ...
Read More →