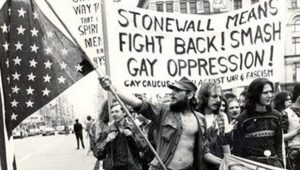 June 28 is the 51-year anniversary of the Stonewall Riots of 1969. LGBTQ communities around the United States and the world commemorate this day as the beginning of the modern gay rights movement. We credit Marsha P. Johnson and other Black, trans and queer activists for fighting against police brutality and paving the way for the freedoms we get to enjoy today.

Stonewall Riots: Pride & Activism, takes place tonight, June 28 at 8 p.m. EST/5 p.m. PST. Campus Pride will be hosting a conversation with young activists on IG Live @campuspride. Student activists and Campus Pride interns April Lichtman, Jerry St. Louis and Luke Whitney will share reflections on Stonewall and the state of LGBTQ activism today. The talk will run for about 45 minutes to an hour. 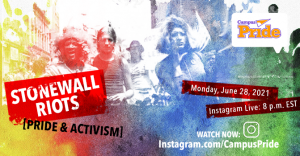 “The Instagram Live slated for Monday seeks to commemorate the Stonewall riots of 1969. Three of Campus Pride’s summer interns will address some of the false narratives surrounding this pivotal event, some of the events that happened prior to Stonewall and modern-day depictions and influences,” says Campus Pride intern and Stonewall event coordinator April Lichtman.

Campus Pride invites you to join the conversation on our Instagram. Find more information about the event at www.campuspride.org/stonewallriotsiglive/. To learn about the Stonewall Riots and the beginnings of Pride, read more on the Campus Pride blog.

April Lichtman plans to graduate in May 2022 with a BFA in acting from the University of Connecticut. She expects to finish her course of study with her acting cohort in the United Kingdom. After graduating from college, she hopes to become a voice actor, director and LGBTQ rights activist. She loves the artistry in the LGBTQ community and has found comfort and joy in watching LGBTQ creators showcase their work.

Jerry St Louis is a second-year Ed.D. student at The George Washington University. After completing his Bachelor’s in psychology at Florida A&M University, he went on to receive his Master’s in social work from Clark Atlanta University. His personal and professional experiences led him to his current work in the intersection of disabilities and LGBTQ experiences. He resides in Washington, D.C. where he is a social worker and advocate for LGBTQ student rights.

Luke Whitney identifies as a gay man. He is a rising senior at the University of Minnesota Morris majoring in communication, media, and rhetoric and human services with an emphasis in social justice. He also works as a gender and sexuality advocate on his university’s campus, advocating for inclusive administrative policies among all University of Minnesota branches. After he graduates, Luke hopes to pursue a career in LGBTQ and human rights activism.