On Saturday, June 26 at 8 p.m. EST/5 p.m. PST Campus Pride will be partnering with the Center for Native American Youth at the Aspen Institute for a unique discussion on understanding pride within Native Indigenous Two-Sprit Communities with special guest Queer Indigenous Youth Leader Talise Mendoza-Green (she/they). 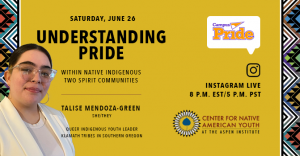 A Description of Two-Spirit Identity

In more recent years, the Two-Spirit identity has been added to the LGBTQ+ acronym. According to the National Congress of American Indians, the definition of the Two-Spirit identity is “a contemporary umbrella term that refers to the historical and current First Nations people whose individual spirits were a blend of female and male spirits.” The term has been reclaimed by Native American LGBTQ+ communities.

The Federal Health Program for American Indians and Alaska Natives says, “traditionally, Native American two-spirit people were male, female, and sometimes intersexed individuals who combined activities of both men and women with traits unique to their status as two-spirit people. In most tribes, they were considered neither men nor women; they occupied a distinct, alternative gender status. In tribes where two-spirit males and females were referred to with the same term, this status amounted to a third gender. In other cases, two-spirit females were referred to with a distinct term and, therefore, constituted a fourth gender.”

The Intersections of Gender, Sexuality, and Race

It is extremely important in conversations of self-acceptance and love, especially within the LGBTQ+ community to understand the many intersecting identities of our very existence. Such intersections can at times be a challenge mentally, emotionally, and physically.

Youth leader Talise Mendoza-Green understands these complexities all too well. “Being Native and Mexican, I have the world telling me who I should be. And yes, while they both sometimes mash they sometimes are like oil and water. They do not mix well at times.” said Mendoza-Green.

“Growing up I knew I was queer but didn’t want to say it out loud. Now being 21 I’m not scared to say I am queer.” With both of her worlds inevitably blending together she does find it challenging at times. Their Mexican side tends to have a more strict gender binary and toxic masculinity known as “machismo.” Whereas their Native side lends to a more lax outlook on gender expression, one can only imagine how difficult it can be to fully grasp who you are. Yet despite it all, Mendoza-Green has been able to do so in stride, “I love being queer I love getting to learn about the history of queerness. I’m so excited to get to show you what pride means to me.”