Encouraging young men of color to talk openly about HIV

The Act Against AIDS initiative was launched by the Centers for Disease Control and Prevention (CDC), the U.S. Department of Health and Human Services, and the White House to raise awareness of HIV/AIDS among all Americans and reduce the risk of infection in the most affected populations- gay and bisexual men, African Americans, and Hispanics and Latinos. 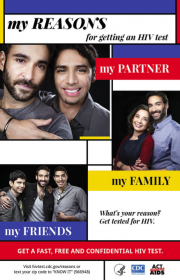 Many Latino gay and bisexual men are at elevated risk for HIV due to a range of underlying social and environmental challenges. For example, a substantial portion of Latinos face economic hardship, language barriers, and lack of access to health care, which can limit their ability to use HIV prevention services, testing, and treatment. In addition, cultural norms can perpetuate stigma around homosexuality and HIV.

Gay and bisexual men in particular continue to be at elevated risk for HIV due to a number of complex factors including: 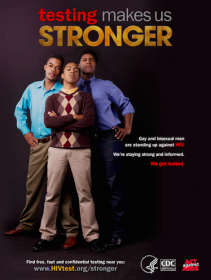 Black gay and bisexual men are among those hit hardest by HIV. Among all men-seeking-men, black/African American MSM (men-seeking-men) accounted for 10,600 (36%) of the estimated new HIV infections in 2010.

Research shows that black gay and bisexual men do not engage in riskier behaviors than other MSM, but are at elevated risk due to a range of social and environmental factors. The high prevalence of HIV that already exists in many black and gay communities increases the likelihood of becoming infected with each sexual encounter. Factors such as undiagnosed HIV infection, limited access to health care, homophobia, stigma, and economic hardship also contribute to increased HIV risk.

HIV Testing Can Help Break the Cycle of Infection.

Gay and bisexual men of color can help break the cycle of HIV in their community by knowing their status. Increasing HIV testing is critical to reducing new infections, because people who know they are infected can access life-saving treatment and take steps to decrease the risk that they will transmit HIV to others. In addition, those who test negative can take action to protect themselves from infection.

CDC recommends that sexually active gay and bisexual men get tested for HIV at least once a year, and recent CDC data suggests that more sexually active MSM might benefit from more frequent HIV testing (every 3-6 months).

This is your call to action! It’s time to discover your reasons, start talking, and use HIV testing as a source of strength. Get the conversation started about…

For more information and resources on getting fast, free, and confidential HIV testing, please visit:

Encouraging gay and bisexual men to have conversations about safer sex.

Encouraging HIV testing among Hispanic/Latino gay, bisexual, and other men who have sex with men.

Increasing HIV testing among black gay, bisexual, and other men who have sex with men.

Tyler Eilts is an alumnus of Illinois State University, where he is also seeking his Master’s degree in Interpersonal Communication and Women’s and Gender Studies. He is a 2015 Summer Fellow for Campus Pride.