I am Prin. I am a non-binary or genderqueer trans person, I am an activist, I am from Tampa, Florida, and I am a Sophomore at the University of South Florida. I am on the USF Bulls Service Spring Break for Campus Pride in Charlotte, North Carolina. Last night we attended the Charlotte City Council meeting about the Charlotte Non-Discrimination Act Amendment, and I was disgusted by the behavior of some of the opposers of the bill who claimed to be “God-fearing Christians.”

I don’t have the words to describe my feelings about what I witnessed. It was amazing, horrible, and life changing all at the same time. 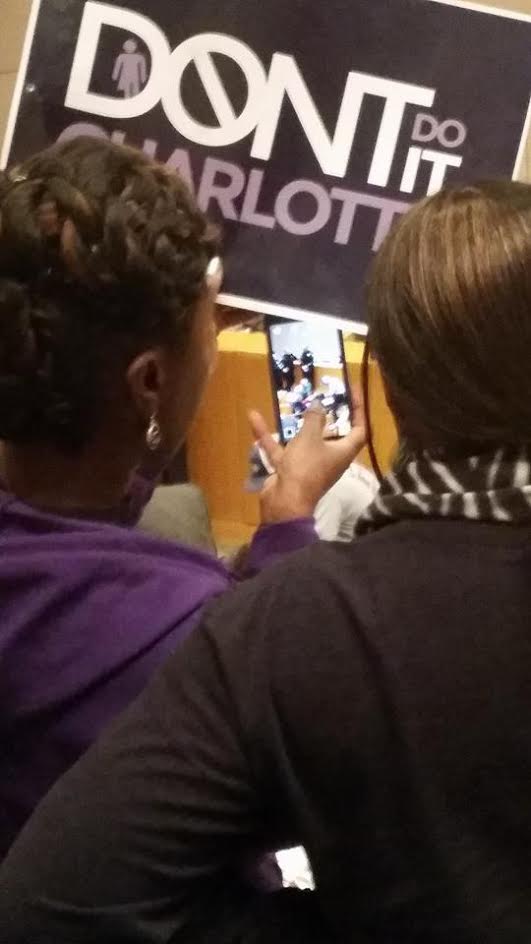 A frail transgender woman named Coco spoke to the Council Members, and as she was leaving the podium she collapsed to the ground. When she did this, many of the people opposing the bill laughed at her, took photos of her laying on the ground unresponsive, and made fun of her gender. One woman standing in front of me was one of these disgusting people, and an Ally said to her, “How dare you make fun of [Coco] for falling!” To which she responded, “She deserved it. God will strike them down.” This woman continued to take photos of Coco and laugh for 5-10 minutes as she was placed on a stretcher by paramedics and carried out of the room, seeming to be unconscious from where I was standing. I am so hurt by this. I can’t even express. The fact that any human being could do this to another human is unbelievable to me, but she wasn’t the only one. Another person who allegedly laughed at her and made fun of her was a man named Flip Benham.

After Coco was escorted out, and we were brought back from recess, a straight cisgender ally, Greg Farmer, spoke up against Flip Benham, the woman I witnessed, and others like them. Thank you, Greg Farmer, for showing everyone how to be an amazing ally to the transgender community.

While people were telling their stories on stage, discrimination was happening in the restrooms of the same building. Children of the opposing people were allegedly sent into the restroom, planted there, and told to come running out calling to the police when a transwoman walked in there. This transwoman was then escorted out of the women’s restroom, and also not allowed to go into the men’s restroom. There are no gender neutral restrooms in this building. Everyone needs to pee, but this woman was not allowed to use the restroom. Instances like this cause a lot of medical problems in the transgender community. Another transwoman who was 17-years-old was confronted when leaving the women’s restroom with her mother, by Flip Benham and other men, and was misgendered and harassed by them. Even with this discrimination happening, the bill was not passed. 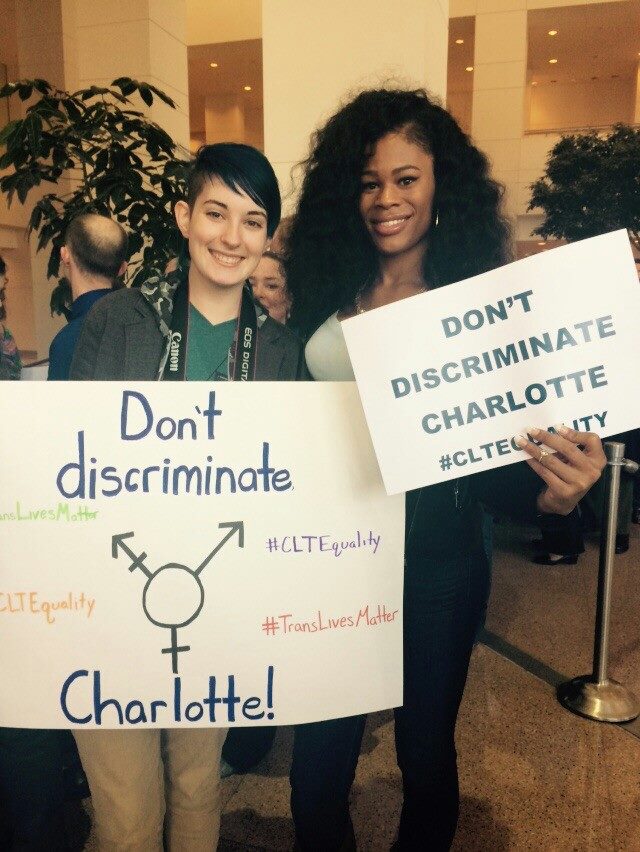 I am so proud of the transwomen who had the opportunity to find the strength and courage to speak up, especially the transwomen of color. This was such a powerful and moving night. I am so honored that I was able to meet Andraya Williams and able to hear her story.

I am so thankful towards LaWana Mayfield and John Autry for not leaving behind their transgender neighbors. I thank Mayfield for not supporting “incremental steps,” and for protecting all of the children [of God].” Too many times in the gay rights movement have transgender people been left behind, and it made me so happy to see that we were not left behind on this night. All or nothing. It is unacceptable to simply, “hold your nose and vote for something,” as Patsy Kinsey did this night.

Many council members and speakers said they wanted to see the statistics and research done on transgender discrimination. Many did not believe it was real. But the reason there aren’t any statistics or research is because there aren’t any policies in place, and there isn’t any funding for this. If you want to see statistics, then fund it!

Even with everything that happened in the building, the bill was still not passed. I urge everyone to speak up and tell your story. Make them listen. Don’t allow them to continue ignoring discrimination against us; it is unacceptable! Somehow, people still believe that “Discrimination is not an issue here [in Charlotte],” because, “there is no proof.” -David Benham. The proof is in the way your father behaved last night. That is discrimination.

Many people repeated the statistic that only 1 in 1,000 people are transgender. I am unsure of the accuracy of this statistic, but if it is true, and Charlotte is a city of 800,000 people, then that means that there are approximately 800 transgender people in Charlotte. You cannot deny that this is a lot of people, and it is unacceptable to deny them safety protections and access to public facilities.

I will continue fighting against injustice, and standing up for my community. These people need to see our faces, specifically City Council Members Ed Driggs and Greg Phillips. We are people too. We deserve protection and equal rights.

Prin is a Sophomore in Women’s and Gender Studies at the University of South Florida in Tampa. Prin prefers they/them/theirs pronouns, and is interning to create an LGBTQ+ LLC on campus called Spectrum.

One Response to Guest Commentary: Fighting against Injustice – Standing for My Community