A LGBTQ History Month book review of The Gay Revolution: The Story of the Struggle by Lillian Faderman 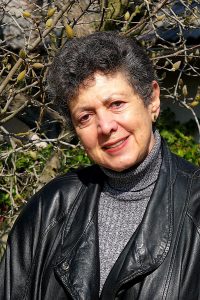 We all must know our history. As a young LGBTQ activist, I know this to be true. The history of the LGBTQ movement is a complicated one. At times, the movement has not been inclusive. At times, women, racial minorities or trans people have not felt accepted. However, our movement has also made some amazing gains. Despite the complicated relationship I have with the history of the LGBTQ movement, I know that I am a better advocate and activist by knowing it.

The Gay Revolution: The Story of the Struggle is an 800-page mammoth chronicling the history of the LGBTQ rights movement in the United States. Written by six-time Lambda Literary Award winner Lilian Faderman, this book is much more than a smattering of facts– it is a beautifully woven piece that gives the personal journeys of the movement’s key players in an open and honest way that gives people’s strengths and faults.

As a young intersectional activist, I was nervous to begin this novel. I think many young people today share my fears that our history will be inaccurately told– white-washed and mansplained to an unrecognizable story fit for a Hollywood screen, but completely untrue to history. Or, the worry that, in effort to create an uplifting story about the unity of the community, the mistakes and prejudices of our community are erased. I have both of these fears when looking into our history, because in order to grow, the LGBTQ movement must recognize its faults and all the embarrassing moments of its past.

Faderman doesn’t give in to these tendencies as she describes the sexism and transphobia present in the early movement. As I read this book, I could feel the tension between the assimilationists, who want to merely become a part of the heteronormative world, and the revolutionaries who want to shake off heteronormativity and create a world not defined by such arbitrary and oppressive systems.

Major players in the movement, like Frank Kameny, are accurately portrayed as with all their successes and failures. Kameny began some of the earliest protests against the anti-gay witch-hunt that cost him and countless others their jobs. He was an excellent leader and made many gains in the movement. However, he was also extremely dismissive of protestors that wanted more, protests that wanted to hold hands in the streets and declare that they were not, in fact, just like heterosexual people, and nor did they want to be. Faderman understands that we can appreciate a person’s work for the movement without ignoring or dismissing their faults.

The book is not, however, without its faults. Despite pointing out the overwhelming transphobia and biphobia in the “gay and lesbian” movement, the book fails to point out the important contributions of the trans and bi community. There are quick mentions of Stonewall heros Sylvia Rivera and Marsha P. Washington, but much like Marsha’s middle name, Faderman’s approach to trans and bi people in LGBTQ history is “pay it no mind.” 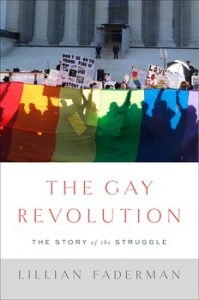 Another downside of this book is its failure to recognize identities outside the typical narrative of LGBTQ. While the story does begin at a time where the language for certain identities simply did not exist, there is a noticeable lack of the identities that make the LGBTQ community so rich – nonbinary, intersex, pansexual and asexual folks. Modern discourse on the distinction between different types of attraction, including romantic and sexual, failed to make the cut in this story.

Ultimately, The Gay Revolution: The Story of the Struggle is a well-written journey to the past of the gay and lesbian movement. It is a history we should know and take pride in. This book, however, is not written for the young, modern activist. It is not a history book for a person invested in trans rights, or invested in the rights of outside the monosexual and allosexual world we live in.

That is not to say that I did not learn from this book. LGBTQ people are systematically left out of the canon of American history. Growing up as a member of this community, it took a lot of my own research just to know that who I am is not a new, unheard-of thing. Faderman has done a service to the community by chronicling this large part of our history into an accurate, easy-to-read novel. This is a book I wish I would have found when I was first coming into my identity, eager to find anything that would validate who I am and help me learn about the circumstances that led to my identity politics.

This is a book for those who have begun this journey– for those who want to understand the history of gay and lesbian politics as background to support the larger LGBTQ community today. This book is not everything you need to become the best supporter of the community, but no one piece of literature can be everything. After reading this book, I encourage a reader to seek out the stories left out– transgender, nonbinary, bisexual, pansexual, asexual, intersex, aromantic, demisexual and all the identities we as a community must support. Our movement is much larger than gay men and lesbian women who fought against job discrimination and won marriage equality, though their stories are an important part of picture.

Our history does not end with marriage equality, and our history is more nuanced and beautiful than any one book could ever write.