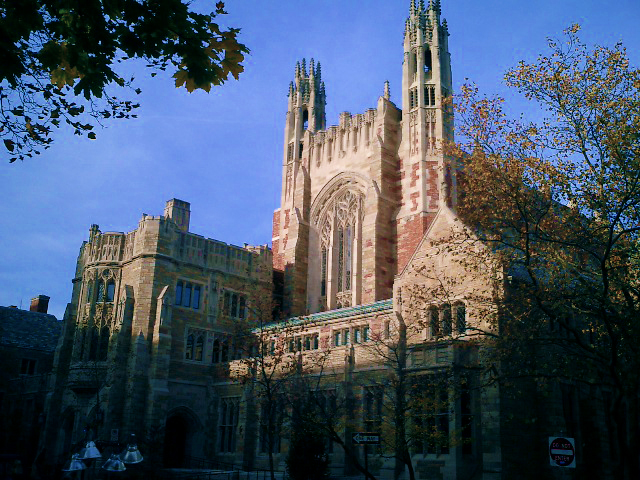 A few weeks into my first semester at Yale, back in 1976, I was walking to lunch in my residential college, when I ran into a group of freshmen on their way to Commons, the largest dining hall on campus. I was quiet by nature, and always preferred small to large. Everything about Commons felt too big and too loud. But I hadn’t yet found my social footing, so I was pleased when my classmates asked me to join them.

The day was sunny and warm, perfect New Haven post-summer-pre-winter weather. We all wore jeans and T-shirts, backpacks slung over our shoulders, comfortable in the light breeze. We were near the entrance to Commons, when I heard a student raise his voice: “Nobody wants you here!”

I turned and saw a folding table with three young women. Their petition was short and simple, asking people to support gay and lesbian students. The young man who yelled was surrounded, a pack of five men, threatening and condescending. The three women were clearly upset, but stood their ground.

I barely registered my lunch group’s calling for me to “come on” and “hurry up.” Instead, I slowly walked back to the table. Quietly, I signed the petition. The women thanked me politely, although their eyes were on the pack, as were mine. I can still picture those boys – all in polo shirts, trim and fit, Gentlemen’s Quarterly handsome. I met each of their eyes, and they stared back. A few grinned brazenly; one looked me over and licked his lips. I was unable to speak.

In my high school, gay boys were constantly targeted, verbally and physically, but violence was common, because my high school’s population included several gangs. Yes, the gay boys were bullied terribly, but most of the violence broke out between rival gangs. Surrounded by the fireworks of gang warfare, I failed to identify the magnitude of homophobia as a source.

I don’t remember much about that lunch, except the stares from the group. When I finally found my voice and asked what was wrong, the bravest of the bunch spoke up: “Are you gay?” I shook my head and they exchanged baffled glances. The girl to my right put down her glass of milk. “Then why did you sign the petition?”

I walked to my next class slowly, knowing I had done something terribly wrong. It took me weeks to figure out that I should have returned to that folding table, and stood with those three women. I should have found my voice, spoken up, said that if “Nobody wanted them here”, then I was glad to be “Nobody”.

Over time, I found my group of friends at Yale. I stopped being frightened of polo shirts. I began to hit my academic stride, and my confidence grew. I ate at Commons, felt comfortable, learned to handle big and loud. By the end of my first year, I had fallen head over heels in love with Yale. But I was also disturbingly aware that during my bright college years, the people on the LGBTQ spectrum often had a tough time, navigating an environment that pulsed with overt and covert hostility.

I’m told that Yale has grown, changed and evolved into a safe and supportive environment for people of any sexuality and sexual identity. Now, when I look over the curriculum for Women’s, Gender and Sexuality Studies, I’m impressed. Back in my time at college, I was involved in Student-to-Student Counseling; now I read about Walden Peer Counseling, Pathways Peer Counseling, Queer Peers at Yale – and I feel a surge of pride for my alma mater. I’ll forgive Yale for needing time to evolve, and I’ll ask those 3 women at that folding table to forgive me for my silence, for walking away on that day back in 1976. I, too, needed time to evolve.

Amy Kaufman Burk is a novelist, blogger and strong supporter of Marriage Equality. She has written 2 novels – “Hollywood High: Achieve The Honorable” and “Tightwire”. Both books are on Amazon’s Top Rated List for LGBT Literary Fiction. To find out more about Amy, visit her website at http://amykaufmanburk.com