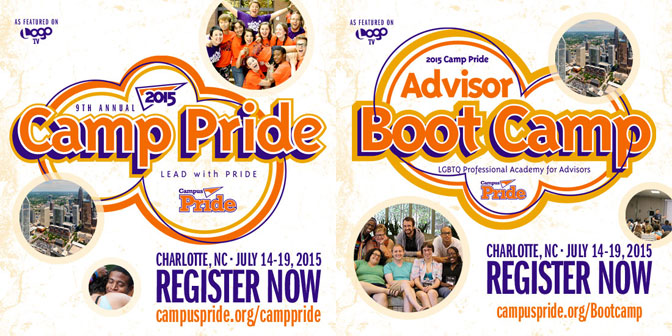 CHARLOTTE, N.C. – Over 150 undergraduate students, faculty, and advisors from colleges and universities from around the country, including from Charlotte’s universities, will flock to Charlotte this summer for the ninth annual Camp Pride and fifth annual Advisor Bootcamp on July 14-19, 2015, hosted by Charlotte-based nonprofit Campus Pride. Bringing this event to Campus Pride’s home was an intentional move to have the first-ever national annual event of this kind held locally in the Queen City.

Camp Pride is the nation’s premier Leadership Academy for undergraduate lesbian, gay, bisexual, transgender, queer and/or questioning (LGBTQ) and ally students. The camp allows participants to develop their social justice and leadership skills and create action plans for how to implement strategies to bring further LGBTQ inclusion to their local universities and communities.

Advisor Bootcamp is for professionals advocating for LGBTQ and ally college students and organizations on campuses. The boot camp allows participants to expand knowledge, enhance skills as well as collaborate with others who share a passion for advising and creating safer, more welcoming communities.

Students and advisors from local colleges, including Davidson University, the University of North Carolina at Charlotte, Central Piedmont Community College, Winthrop University, and Johnson C. Smith University, will be in attendance at Camp Pride and Advisor Bootcamp, along with 40 diverse campuses from across the nation.

Campus Pride has been a presence in Charlotte since its founding in 2001. The organization focuses 26 percent of its resources in the immediate Charlotte area, and 60 percent in southern and rural communities. Campus Pride is advocating for transgender college students during Camp Pride during a Day of Action for Trans Justice and Community Potluck with Purpose on July 16.

“There is a pressing need for education around trans youth, and a healthy LGBTQ community must invest in protecting all trans people,” said Windmeyer. “Allowing student leaders to join local organizations and leaders will give a mentoring effect that cannot be more important when it comes to social justice organizing.”

The local community is invited to participate in a Community Potluck with Purpose which will end the Day of Action for Trans Justice activities, to be held at the Sacred Souls Community Church at 6:30 PM. Sacred Souls Community Church, the Charlotte Lesbian and Gay Fund and the Freedom Center for Social Justice will cosponsor the event. Diego Sanchez, former Senior Policy Advisor to Congressmen Barney Frank and current Director of Policy for PFLAG will be the keynote speaker. The event will include free food and entertainment by transgender artists Koko Jones and J Mase and activities to allow the Charlotte community to meet the Camp Pride and Advisor Bootcamp attendees as well as the Campus Pride team.