CALLING ALL STUDENTS: There is still time to apply for up to $600 in social justice mini-grants from Campus Pride

Are you an activist on your campus? Do you want to create change on your campus? We want you! There is still time for LGBTQ college students to apply now for the next round of Social Justice Mini-Grants for Activism. To learn more, visit campuspride.org/ActNow.

In honor of Campus Pride’s 20th Anniversary, we are awarding Social Justice Mini-Grants for Activism to fund student-led projects on college and university campuses. The program offers grants of up to $600 to student activists involved in social justice work. Campus Pride announced the first round of mini-grant recipients in August.

All grant recipients are working on projects that are entirely student-led. Campus Pride believes in supporting LGBTQ youth and helping them become leaders in their communities. Check out our blog about grant recipient David Shill’s Campus Pride-funded drag show with BYU Pride.

Find out more about our grant awardees at campuspride.org/SocialJusticeMiniGrantFunding. 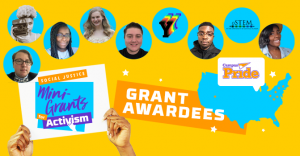 Here is a list of awardees and their social justice projects that Campus Pride is currently funding:

Student organizing and advocacy to protect LGBTQ students on campus

Production of an original play with trans artists