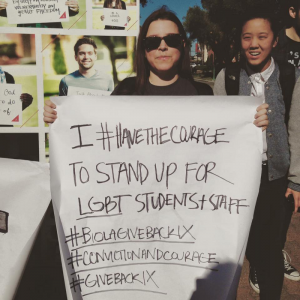 I’ve seen a lot of responses to California’s SB 1146 in the past days and weeks. LGBTQIA student activists argue that the bill seeks to disable Christian colleges from seeking exemptions from Title IX when it comes to LGBT discrimination on campus. The schools and their supporters, on the other hand, have argued that their religious freedom is being threatened by this bill. I want to begin by saying that I recognize that I am neither the first to speak or the center of this conversation; fundamentally this, to me, is about the students who attend these universities. Biolans Equal Ground/Biola Queer Underground, have represented LGBTQIA students at Biola and have been working to get the word on this bill and to bring attention to the arguments against it. My friend and colleague Brian Walton, an ally, has gone in detail, into the specifics of the SB 1146 bill and Christian college’s campaign against it here: Fear-Mongering From Religious University over LGBT Protections.

I want to respond to some of the claims made in one response in opposition to SB 1146 here. Brett McCracken, author of the books Hipster Christianity: When Church and Cool Collide and Gray Matters: Navigating the Space Between Legalism and Liberty recently wrote an essay called “‘Tolerant’ California Will Not Tolerate Christian Colleges”, on his blog. I’d like to push back on some of the points he argues for, as they seem to be similar in tone and rhetoric to those of institutions like Biola University are using to garner support for the opposition of SB 1146.

For the record, I believe that tolerance, inclusion and equity (and here I mean equity as opposed to equality, as Shane Safir describes in her essay “Equity vs Equality”) have never been terms that have allowed space for the tolerance and inclusion of discrimination. This seems to be where LGBTIA students and the administrations of these institutions disagree. In my opinion, these terms mean that as a society, we are attempting to create spaces within our institutions, where discrimination and exclusion are not the status quo. And yet opposers of the bill argue that their opposition of SB 1146 isn’t about reserving the right to discriminate.

It seems that the crux of the disagreement between Conservative Christian colleges and LGBTQIA students is this: fundamentally (no pun intended), these Conservative Christian colleges believe that LGBTQIA people aren’t part of a protected identity class in the same way as people of color or women are,even though LGBTQIA students would argue vehemently that they are. I’ve heard many refer to people being LGBTQ as a “lifestyle” choice in conservative spaces. This assumption (an assumption that could, at the very least, be challenged genetically, psychologically, biologically, etc) undergirds their entire argument for exemption, since religious tradition, for them, would override a lifestyle choice in the end.

As an aside, maybe an interesting conversation could happen over the claim that if either of the two, religion and sexual orientation would be considered a “lifestyle choice”, it seems it would be the former, as opposed to the latter. This could perhaps make the case of allowing LGBTQIA students to be a protected class at religious institutions, on the basis of these institutions own arguments for protection (granted the protection of freedom of religion is much more explicit constitutionally than the protection of one’s “lifestyle”, but this is a conversation I’d be interested in seeing both sides having).

That being said, the essay I’m responding to argues that the real victims of SB 1146 are Religious institutions. For McCracken, SB 1146 is an example of what he calls,

And yet, I would argue that what the essay refers to as “the new intolerance” is actually anything but new. It’s the same “intolerance” that caused abolitionists to oppose widespread religious institutional support of slavery; it’s the same “intolerance” that caused the Rev. Martin Luther King, Jr. to lambast white and black moderate clergy in his “Letter from Birmingham Jail” when they asked him to “go slow” when it came to fighting racial injustice. As Jon Green writes,

Ending the tax exempt status for religious institutions doesn’t ban those institutions and it doesn’t constitute, as [Damon] Linker claims, “persecution.” All it means is that the government isn’t going to endorse their practices or give them extra help. Orthodox Jews are more than welcome to continue to turn away interfaith couples, and the Mormon Church is more than welcome to turn away same-sex couples, so long as they don’t do so with the direct endorsement of the government. This same principle is why Bob Jones University — one of the nation’s highest-profile religious institutions — lost its tax-exempt status in 1983. The University insisted on discriminating against African-American students, and the (notoriously irreligious) Reagan administration decided that the federal government couldn’t endorse that sincerely-held religious belief.

As per Green, SB 1146 isn’t about legislating intolerance of Christian universities; it’s about not allowing LGBTQIA discrimination to continue at institutions that receive taxpayer dollars from the state.

In reality, when we see claims of persecution in the panicked response from Biola, what we are really seeing can be summed up by the following anonymous quotation: “When you’re used to privilege, equality feels like oppression.” Religious institutions have been used to getting their way when it comes to exemptions like this for years. Now that they may not be, what actually is a push for equality on these campuses, feels to those involved, like oppression.

McCracken’s essay goes on to cite an opinion piece in the New York Times to make the case that liberals have been guilty of being intolerant of conservatives for a while now. The piece, by Nicholas Kristof, argues that

When perspectives are unrepresented in discussions, when some kinds of thinkers aren’t at the table, classrooms become echo chambers rather than sounding boards — and we all lose… Universities should be a hubbub of the full range of political perspectives from A to Z, not just from V to Z. So maybe we progressives could take a brief break from attacking the other side and more broadly incorporate values that we supposedly cherish — like diversity — in our own dominions.

Again, this is a rhetorical misdirection. The opinion piece is referring to the discrimination experienced by conservative scholars at public institutions. While we could argue about whether or not conservative scholars face discrimination at public, state schools, this it not what SB 1146 is about. As an alumnus of Biola University, I can certify that, in fact, universities like Biola are emphatically not “a hubbub of the full range of political perspectives from A to Z.” That’s exactly why bills like SB 1146 are being written. It’s my opinion that many of these universities don’t actually model what Kristoff is saying we need from universities any better than public higher ed institutions do. In private Christian higher ed, instead of there being only political perspectives from V-Z as Kristoff describes, there’s just A and you sign a consent form saying you believe in it to attend, work and teach there. McCracken’s essay goes on to say that,

California has forgotten what pluralism and tolerance are and why they are valuable for democracy. It’s not about everyone agreeing about everything. It’s about the value for society when the opposite is true: when there are varying perspectives and strong institutions that respect one another even while they hold distinct (and often mutually exclusive) beliefs. Civil disagreement and principled pluralism are foundational to a healthy democracy. Sadly America at large is forgetting how to do this and why we should.

The irony here is that, again, these conservative Christian institutions are, again, emphatically not about pluralism within their halls of their campuses; they are about everyone agreeing about everything; they are not about civil disagreement. If they were, bills like SB 1146 wouldn’t be needed because LGBTQIA folks and “traditional values” folks could go to the same school and agree to disagree. The same thing Biola wants from the state is exactly what LGBTQIA students want from their institutions: protection from discrimination.

Ultimately SB 1146 isn’t saying that religious institutions should be discarded; it’s not saying they aren’t crucial to our public discourse. What it’s saying is that religious higher education institutions shouldn’t be able to have the cake of discriminating against LGBTQIA students while also feasting upon taxpayer dollars for said students to attend, all the while being untouchable when it comes to civil actions from their LGBTQIA students. No one is making these institutions dissolve. In fact, what SB 1146 is doing is finally challenging these universities to do what the rest of public society has to do: become inclusive. If that feels like oppression, imagine what it must feel like to actually be one of the LGBTQIA students attending one of these institutions, watching all these institutions bend over backward, to not have to protect them as people.

Justin Campbell is a college English professor and freelance writer living in Los Angeles. He is the winner of the 2013 Hurston/Wright Award for African-American Writers. He is the co-creator of an original podcast on the intersections of race, gender, sexual orientation and class with spirituality/religion entitled “embodied. a podcast”. Justin is also a contributing writer with the Los Angeles Review of Books and his work has been published in The Millions and The African American Review.

2 Responses to Accustomed to Privilege: A Response to Biola University’s SB 1146 Opposition