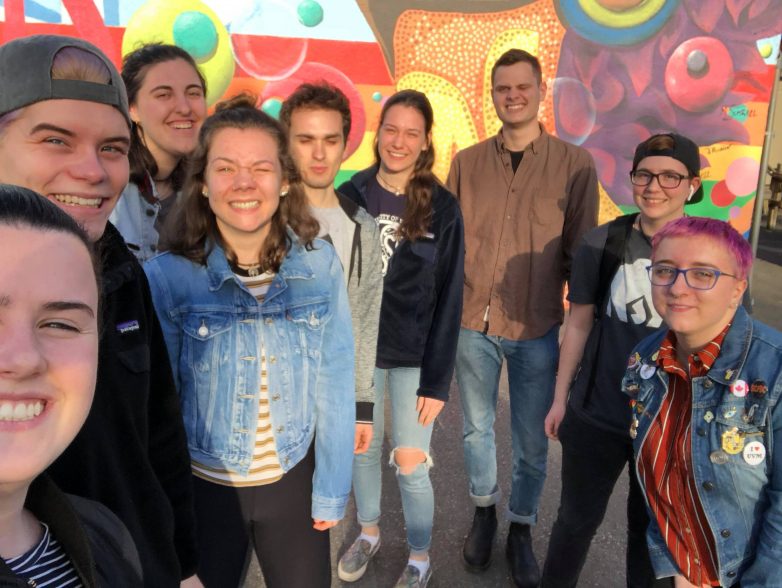 Nine queer (and ally!) Vermonters loading into a twelve-passenger van and driving fourteen hours to the South sounds like the start of a comedy routine. Maybe it could be, but it’s also what we did at 10:30 AM on Saturday, March 9th. When our group of nine left the University of Vermont, it was a balmy 18 degrees Fahrenheit, and most of us weren’t wearing coats. At 4:30 PM, we arrived at our site leader’s house in Connecticut to stay the night. The following morning, bright and early at 7 AM (after also losing an hour of sleep to daylight savings time), we left Connecticut through heavy fog, light snow and freezing rain. About halfway through Pennsylvania, the familiar sight of snow vanished for the unfamiliar sight of the ground, and then for the unheard-of experience of actual, living, green grass. It was something right out of a work of fiction. We reached Charlotte at 9 PM, and after gushing over how beautiful the city was at night, everyone complained about how hot it was, at a sweltering 60 degrees Fahrenheit. Everyone, that is, except for our native North Carolinian. He made fun of us (rightfully so).

On Monday, we got our first view of Charlotte in the daytime. It was gorgeous for a number of reasons; the grass and trees were alive and budding, there were flowers, and murals and the tall, modern buildings. We also spotted a number of people wearing heavy parkas and laughed, though that was probably hypocritical, considering how much we were sweating in our shorts and t-shirts—and, of course, our horrifying experience with discovering that there are still bugs in North Carolinian winters that morning (once again, our North Carolina native made fun of us). We met Shane at 9:30 AM for our first day of service. We were an expected mix of nervous and excited, but Shane was welcoming and friendly and quickly calmed our nerves. We discussed the beginnings, projects and goals of Campus Pride as an organization, and our plans for the rest of the week. After a break for lunch, we returned to begin our individual service projects. We were split up into groups, and we all happily got to work. At 5 PM, Shane called us back for an end of day wrap up—and a surprise. He turned on the projector to reveal drag queen Eureka. We were rendered entirely star-struck, and after a wonderful conversation with her, we headed out for the night. My peers are still gushing about our phone call as I write this, and I think it’s safe to say that we’re all incredibly excited for what the rest of the week brings.

Tuesday morning, my group arrived for our meeting with Roberta Dunn, a North Carolina based trans rights activist. She told us her story of self-acceptance, as well as the journey she took to teach others about transgender people and the rights they deserve. Her story was enlightening and inspiring, but she was also funny and entertaining, and made sure to connect with us on a deeper level. She didn’t let us be shy, either; she demanded we ask questions, or she would “start making things up” just to fill the time slot. She was hilarious, and definitely someone worth listening to. Later, Roberta headed out (but not before a group photo!) and we spent the rest of the work day working on our individual service projects. After work my group headed to some LGBTQ friendly spots recommended by Shane, and we hung out around Charlotte until dinner. For dinner, we met Shane and Brian at Peer Pizza, where they spilled some tea about their fellow drag queens, and some of the upcoming pageants that Shane was participating in. The pizza was fantastic, and we tried something called spicy honey. I think it’s sufficient to say that spicy honey has changed my life forever. I fully plan on getting my hands on some back in Vermont.

On Wednesday we had a bit of a change of setting, and we went in to Ally Bank for the day. Upon arrival, we met with Shane and the LGBT representative for Ally, a man named Marty. Marty gave us a quick tour of where we would be working, snagged us some free coffee, and took us to our meeting room to get to work on our service projects. We got lunch in a park where we gushed about the adorable puppies we saw. One of the puppies was a fluffy, ten-week-old golden retriever that was liberal with her teeth and with her affection. I decided to declare her our team mascot, whether my peers agreed or not. After our puppy break, we went back to our meeting room to meet with a panel of LGBT people in the corporate workplace. By this time, Shane was on his way to Florida for an event, so the panel was led by Don. This panel revealed what life is like for LGBT folks in the workplace, as well as the lengths that companies will go to in order to protect their employees. It showed my peers and I a lot about life in corporate America for queer individuals, and we also got some free stuff out of it. My personal favorite is a notebook that contains sticky notes and tearaway papers. Notebooks are my greatest passion.

Thursday was a day set aside mainly for working on our service projects. We split up into our individual projects for the morning, but with the added fun of having control of our University’s snapchat account for the day. We documented our tasks for our fellow Vermonters on Spring Break, and then broke for lunch. One of our group members had issued a challenge to us to take five hundred photos of each other around Charlotte before the day was up, and whoever contributed the most to those photos won, so lunch was spent eating and taking photos to try and reach that (ridiculous, probably unattainable and definitely unnecessary) goal. At one PM we met with John Arrowood, the first openly gay court of appeals judge in North Carolina. He had some interesting insight into the political systems of North Carolina surrounding LGBTQ issues and gave advice to some of us looking at politics. We resumed our service projects after that, and continued them for the rest of the day.

After nearly burning down the kitchen last night while attempting to fry okra, we got up bright and early for our last day at Campus Pride. Today, we’re finishing up our service projects and speaking to a drag queen as she gets into drag. After that, we’re heading out to see the city and to pack up for the long trip home. Charlotte is a gorgeous city and all the members of Campus Pride have been fantastic to work with. We’ve all taken away important lessons from this service trip, and we all agree that this is some of the most learning we’ve done on a service-learning project. The work being done here at Campus Pride is critical for LGBTQ youth entering into and already enrolled in colleges and universities, and I hope that the organization gets to continue helping people for years to come. To Shane, Brian and Don; we’d like to say thank you so much for this opportunity, and that you were all wonderful to work alongside. You’re welcome to visit us in Vermont any time—and maybe put on a drag show!