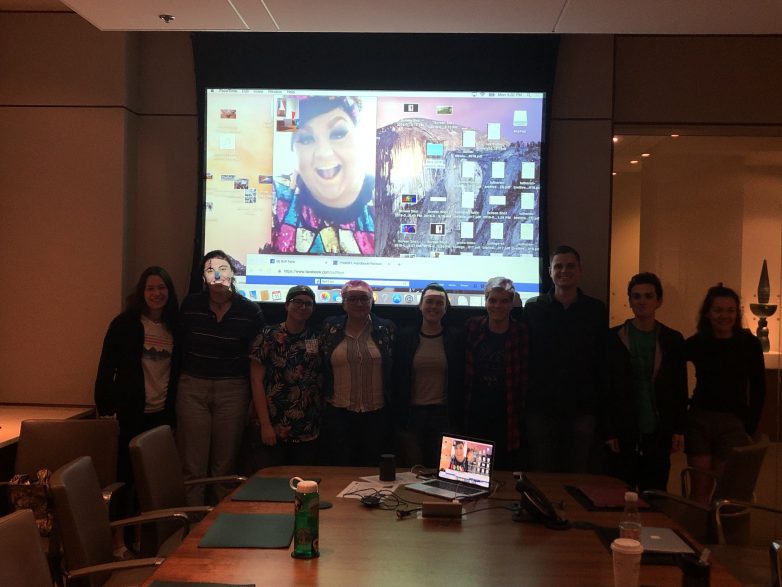 On March 2nd, eight University of Michigan students set off on their road trip to Charlottesville, North Carolina to work with the non-profit organization Campus Pride for their Alternative Spring Break. The perspectives, identities and reasons for going on the trip were varied amongst the group. But the overall mission to learn more, advocate and assist an important cause was shared.

Day one was a lazy day but an important day. The trek down from Michigan to North Carolina was arduous to say the least. Ohio was a seemingly endless landscape we made the best of by playing car games and looking into the spectacle that is Rural King (GO BLUE!). For anyone else considering traversing down to the South, definitely consider stopping for lunch at the Olde Dutch Restaurant in Logan, OH, along the way, their dessert bar is to die for!

Our arrival was marked by our entrance into the Wedgewood Church of North Carolina, The LGBTQ+ friendly church we’d be staying at for the wood. Its pastor Chris welcomed us with an exceptional dinner from a nearby Peruvian restaurant and kindness. Conversation flowed fluidly and respectfully between him and the ASB group from topics of both the mundane and exciting sort. Overall, it was a beautiful, diverse and welcoming place of worship, from the access it provided to the surrounding community to its lavish display of diverse artworks.

We immersed ourselves into the Charlotte scene the following day. Our venture into downtown Charlotte took us to Noda and its Smelly Cat cafe, a quaint little coffee shop we planned to study in and not all order the same dirty chai latte (but alas!). Other stops worth mentioning are Mama Ricotta’s Italian restaurant (carbs are always pleasant) as well as the Harvey B. Gantt African American Museum. Overall, our reflections for the day conveyed our visit to the museum was supremely important and an excellent opportunity to mull over our country and its ramifications.

Yeah, it’s Monday at this point, but a FUN Monday. This was our introduction to Campus Pride! At around 9:30 a.m. we reported for duty where we met Campus Pride’s co-founder Shane Windmeyer. He gave us a brief introduction to what Campus Pride does and its history. Speaking for myself, I was in absolute awe for the things Campus Pride had done, from influencing Chik-fil-A to stop funding anti-LGBTQ+ orgs to pushing for college campuses to foster more inclusive environments. Shane himself also participates in advocacy in a broad sense from interacting with and reaching out to LGBTQ+ activists to publishing six books!

He explained the choice to locate Campus Pride in the south, his belief the south in need of more influence than an already relatively progressive north. Charlotte seemed the perfect space, an inclusive urban center to a south many northern folk presume prejudiced.

The rest of the day was dedicated towards working on our service projects for the break. This included updating the Shame List, a pivotal resource from Campus Pride that helps queer youth know what the worst universities are for LGBTQ+ students, calling universities to participate in Camp Pride, a summer leadership training camp for advisors and students, and finding information on college campuses and their stances on support for trans youth. Overall, it was arduous work, but very informative and rewarding with the knowledge it would help a lot LGBTQ+ students heading off to college.

Day four kicked off with some discussion on the advancements within the LGBTQ+ community. We were initially presented with Harvey Milk’s “Hope Speech”, a poignant, vulnerable rallying cry on the hardships of gay people in American and the prophetic hope Milk had for change. This was followed by a discussion on the AIDs epidemic in the 1980s and how it pushed people to come out and advocate for gay rights. This brought us to looking even further into the past, looking into the harmful, stereotypical depiction of gay men in the media and talking about the evolution of LGBTQ+ people in the media. We also explored the legacy of Sylvia Rivera, a passionate trans rights advocate. She, alongside Marsha P., founded Street Transvestite Action Revolutionaries (STAR), an organization geared towards the advancement of LGBTQ+ individuals and providing housing for homeless queer youth in lower Manhattan. Her presence and influence amazed many of us given that it took a lot longer for advocacy for trans and nonbinary to arise compared to that of gay rights.

Following lunch, we went back to working on our service projects from the previous day.

Day five took us to Ally Bank. Before you sigh, please be aware that Ally bank isn’t just some ordinary, consumer hungry bank; it’s an extraordinary company that not only offers a more transparent banking system but advocates and supports a plethora of amazing causes, especially those geared towards LGBTQ+ rights. An Ally employee Brian came to speak with us about the company, his professional career, and the inclusivity of the company.

Following lunch, Brian was accompanied by four other executives to form a panel that discussed their experiences with their respective companies as members of the LGBTQ+ community. Overall, this was a very respectful and eloquent group of people, their answers to our questions elaborative and thought provoking. Their discussion was filled with unexpected details regarding how inclusive their companies are— we were especially surprised, but excited, to hear about how supportive Duke Energy was for their LGBTQ+ employees. It’s worth mentioning that despite a lacking in trans, non-binary, non-cisgender individuals in the panel, the members involved were very willing to speak on the experiences of their trans coworkers and the support they received.

The sixth day was accompanied by tying up the work we had been contributing to all week as well as speaking to some more LGBTQ+ advocates within the society. On this day, we were introduced to that power couple Linda and Sarah. As an elderly lesbian couple, they were firsts to many of us within the group, most of us accustomed to meeting queer people specifically within our generation. Their story was filled with many hardships, much of them inimaginable within the context of our modern world— yet they kept a positive demeanor, laughing and joking with one another as Linda conveyed much of their story. Their journey is fraught with homophobia and a returning theme of concealment but with a positive underbelly, their finding one another and the known advancement made towards empowering members in the LGBTQ+ community. All of this said, there were many quotables that still linger in our group, notably “I will have your job, George,” in reference to a man who doubted Linda’s capacity in the STEM field.

Following the work day, Shane invited us out for dinner at a restaurant called Pure Pizza. The food was absolutely delicious and (better yet!) suitable for all of us regardless of dietary restriction! 10/10 epic cheese pull!

Day seven came by a lot sooner than expected. These last four days had been absolutely jam-packed with the amount of research we did and people we spoke to. We had almost grown habitual to our unofficial working positions with Campus Pride. But our learning didn’t stop here. We walking into the workroom to meet Roberta Dunn, a local trans advocate. Renowned for her kind hearted advocacy and tasty cookies, she told us her story of growing up, marrying, having kids, realizing she’s a woman and advocacy. She had the most beautiful personality, finding something kind, gentle and funny to say about every facet of her story, even the more painful parts. Her story was of such interest, she somehow stayed an hour over her allotted time without any of us noticing. Meeting Roberta was an unforgettable and inspiring learning opportunity.

Following Roberta’s departure, we tweaked up the final parts of our projects, took pictures and set off to our lives beyond Campus Pride. The experience, in and of itself, was an empowering experience for all of us involved regardless of whether or not we identified as LGBTQ+. Through introducing us to new ideas, people and stories we not only managed to (hopefully) help a lot of people in the process, but also learned a lot about what it means to be a service leader and support people within our communities. For anyone considering working with Campus Pride, we really recommend working with this organization that’s doing such beautiful things for the world.