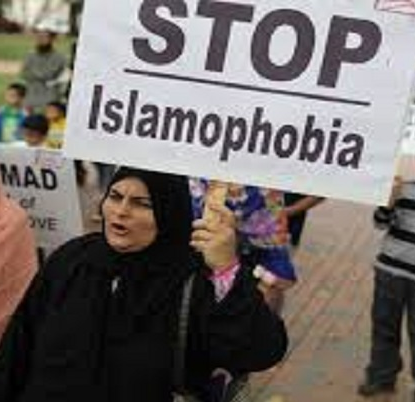 In the month of LGBTQ pride, tragedy struck in Orlando Florida. 49 people lost their lives in a senseless act of murder reported to be the deadliest mass shooting in United States history and the nation’s worst terror attack since 9/11. Almost all of the victims were both young and Latino. Although this tragedy has revealed so much about how strong the LGBTQ community is, it has also revealed Islamophobia in the general public. The American-born perpetrator of the shooting pledged allegiance to ISIS before his death. In response, the general public immediately resorted to dangerous Islamophobic rhetoric.

Less than 12 hours after the Orlando attack, Donald Trump, the 2016 Republican nominee, gave a speech in response. Trump claimed Hilary Clinton wanted to “disarm the U.S. and let Islamic terrorists slaughter them”. He also insinuated the perpetrator of the Orlando attack was a foreigner. Trump also restated his plan to ban anyone coming into the U.S. from countries that have a “history of terrorism”. This toxic speech fueled anti-Muslim beliefs and opened a harmful door which to further Islamophobic rhetoric. Hateful posts, memes, videos, and comments against Muslim people have since been seen all over the internet.

After Orlando anti-Muslim searches spiked with phrases such as: “kill Muslims,” “Muslims are terrorists,” “stop Islam,” “hate Muslims” and “Muslim ban”. This is particularly significant because of the releationsbip between anti-Muslim searches and anti-Muslim hate crimes in the US. The New York Times report showed that there is actually a direct correlation between the two. This shows that spreading hateful anti-Muslim speak can have a far more harmful effect on the Muslim population than one may think when they engage in Islamophobic rhetoric.

When discussing impact of Islamophobia from the Orlando tragedy, we must keep in mind the people it targets the most.  An interview on Advocate.com with Amanda Pressman, a queer Muslim woman, explains what many queer Muslims are currently facing. Pressman states, “I didn’t want to have to protect two sides of my identity from each other.” Many queer Muslims are facing discrimination from LGBTQ individuals blaming Muslims for Orlando and some Muslim people who disagree with their sexual orientation. Pressman wrote, “In either community I need to tone down one of my identities to fully fit in.” On a normal day, those who identify as queer, Muslim, or both have issues with revealing their identities in their communities. Lifting up the stories of those experiencing discrimination on these multiple fronts allows the intersectionality of their identities to be heard. It allows their pain to be recognized and not erased.

Understand your actions and consequences

In addition to how problematic it is to project the attitudes toward one person onto an entire group of people through generalization, the Islamophobic behavior is extremely dangerous because it actually contributes to the work ISIS does. Experts say the heightened Islamophobia reflected by the search interest plays right into the hands of ISIS. It generates hostility between Muslims living in the West and their fellow citizens through terrorist attacks which has always been part of ISIS’s strategy. While people are directing their anger about the Orlando attack towards American Muslims, they are actually fueling Muslim extremists.

Speak out against Islamophobia

By having conversation with friends and family, you have a platform to change their hearts and minds regarding how they perceive Muslim people. Another platform that we have today is social media. One paragraph or photo about supporting Muslim people and ending Islamophobia may reach hundreds of people. If you are looking for ways to speak out and resist Islamophobia, you can take to social media. Muslim clerics such as Khalid Latif and Imam Muhammad Musri have tweeted out offering support and prayers to those affected by the Orlando attack. CAIR tweeted to American Muslims about donating blood for victims of the attack. “We’ve organized a blood drive, organized an online fund drive to raise funds for the victims,” said Hassan Shibley, the chief executive director of CAIR Florida. “We’re also coalition-building to unite the community and send a very clear message that we, regardless of your race, religion or sexual orientation, will stand united as Americans and as human beings.

Along with posting tweets, you can create a tribute video to share. Many people have seen the beautiful tribute sharing the names and individual stories of the 49 people lost that day by Emmy Award-winning director Ryan Murphy and renowned producer Ned Martel, with the support of their colleagues at Ryan Murphy Television. This tribute shows many famous performers teaming up with HRC’s #StopTheHate Campaign to end anti-LGBTQ hate and gun violence. Share this video or create your own! Sharing the importance of treating Muslims with love with your Facebook or Instagram followers through videos like these or posts is a good way to allow your voice to reach a wide range of people.

While some people are resorting to discrimination against Muslims, many LGBTQ people and leaders are speaking out against Islamophobia. Mirna Haidar, an advocate for LGBT people and a gender-nonconforming Muslim, is a board member for the Muslim Alliance for Sexual and Gender Diversity. Haidar has become a spokesperson for her community, countering the media narrative that erases LGBT Muslims. In addition to to Haider, many LGBTQ organizations are also speaking out. The National Queer Asian Pacific Islander Alliance (NQAPIA) released a statement urging “our community and allies to refrain from rhetoric that lays responsibility on any one community. The acts of an individual are not representatives of any one ethnicity, race or faith.” Brenda Abdelall, director at the Muslim Advocates, joined HRC at a press conference on Sunday. “We stand in solidarity with the LGBTQ community. Your grief is our grief,” she said. “Your outrage is our outrage. We are one family together.”
By attending speeches or sharing videos of these speeches to your social media accounts, you are supporting the end of Islamophobia by lifting up these voices.

In addition to posting on social media, you can resist attempts to foster anti-Muslim hatred by calling out those who promote this dangerous rhetoric. You can write to your politicians who are supporting this behavior or doing nothing to prevent it. When politicians are aware that the people responsible for voting them into or out of office disagree with what they are doing, they are likely to feel pressure to change. Visit USA.gov to find out how to contact your federal, state, and local elected officials.

Educate yourself on the factual information surrounding terrorist attacks and learn how to scope out any false statements that the media may be using to twist a story in their favor. Love will always conquer hate, and the last thing that needs to be done when a tragic terrorist attack takes place is the production of more hate through Islamophobic rhetoric. We encourage people to act in their own communities, to be as visible as possible, and to speak out and take action.

If you are involved in interfaith work, bring up the topic of Islamophobia at your meetings. Explain the need for all faiths to address and publicly condemn all forms of intolerance. If possible, get the organization to issue a public statement condemning Islamophobia in general. Also address the bigostry happening in response to specific incidents like those mentioned above. If you are involved in an on campus organization, speak with your group to issue a statement or hold an on campus event supporting Muslim students and ending Islamophobia. This is an important part of activism to end Islamophobia because it shows that other religions are actively supporting Muslim people.

Having reading material on this matter freely accessible offers a different resource to educate on Islamophobia other than social media. Request your local library to purchase some of the latest books and articles about Islamophobia. Some of these include Islamophobia: Making Muslims the Enemy, Islamophobia and Anti-Americanism: Causes and Remedies and Combating Islamophobia depends on unlearning intolerance

In addition to reporting Islamophobic acts or speech to your local police department, report to your local FBI office. The FBI collects hate crime statistics. File a report with the Council on American-Islamic Relations as well. They issue an annual report on Muslim civil rights in the US. Reporting Islamophobic acts or speech will allow action to be taken to end future attacks. Every bystander has a duty to speak up in these situations. You can find your local FBI office here!

Reaching out to others to combat any cause helps strengthen the fight. We are always stronger together. There are several things you can do alone as listed above, but I urge you to look up other organizations working to end Islamophobia. Some organizations include: The Council on American-Islamic Relations (CAIR) and The Islamophobia Network. In addition, reach out Muslim campus organizations to see how you can help end Islamophobia on your campus.

There are many things non-Muslim people can do during this time to combat Islamophobia in the U.S.  Whether you are speaking to groups of people in person or sharing a post on social media, you are making a contribution to end Islamophobia in the United States. We as a society can dismantle Islamophobia if we make a conscious effort to non only refuse to take part in it, but also raising awareness of its existence and the urgency of its termination.