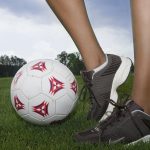 I remember growing up piling into the mini-van after a recreational league soccer game with all of my teammates… it was a fantastically simple time. Laughing and singing all the way home, the root of our friendship centered on a ball we chased around a field for an hour. The game is what brought us together.

Time goes on, though. You grow as a person and start to discover your identity outside of soccer.  The differences in yourself, as well as your beliefs, taste, opinions, and all other aspects of life become more apparent as you grow up.

What once bonded us together didn’t mean as much. Now, there was more going on in our lives than just soccer. For LGBTQ athletes, there was suddenly this wedge between them and their identified straight teammates. All at once, the juice boxes and car rides weren’t as important. You were the “gay kid” or “the bisexual” on the team, no longer someone who could bond with the rest of the straight team members. Society tells you that because you are different, you should not be included.  Consequently, that’s what LGBTQ athletes presumably think and feel, out or not.

Being in a team setting means that a lot of personal information is exchanged (whether voluntarily or not), and if the news about an individual athlete isn’t what is considered “normal” or “morally correct” to the other members of the team, it is believed that it will cause tension amongst the group. That’s the concern of the non-heterosexual athletes I’ve talked to. This worry is completely realistic, but if we give our teammates (remember, the ones we shared juice boxes and car rides with) the benefit of the doubt, they may surprise us!

I’m here to tell my story. It’s probably going to be shocking and not what one would expect me to say about my experience as an out athlete; however, I digress: my experience has been overwhelmingly positive. I’m pretty sure I’m one of the luckiest athletes out there, because my team is the epitome of a loving family, what a team should be.

The amount of diversity on my team is quite impressive. We have young women from all over the country, from all different religious beliefs, socio-economic backgrounds, ethnicities, races ,and  sexual orientations. There is no room on our team for bigotry and hate. We’ve been fortunate enough to embrace our differences and celebrate what makes us all unique, together.

Speaking on the topic of sexual orientation, I’ve found that there is no difference in treatment than if I was of a different religion or race. Occasionally there will be a “that’s so gay” remark, but nothing that I would view as hostile or evil. Oftentimes if there is a slip, they’ll correct themselves and replace “gay” with a more appropriate word.

I do believe female teams in general are more accepting of a lesbian or bi teammate. This could be because athleticism/toughness and sexual orientation aren’t view as a direct correlation in female sports. For some reason, this is different in male sports. If a boy identifies as a gay man on an athletic team, he carries the stigma of being weaker or “girly.” This is obviously not true. To my knowledge, there are no “out” gay identified male athletes at my school. There are plenty of females, but I don’t think the male athletes are comfortable expressing their sexuality for fear of ridicule. I understand that’s a major assumption, but it is something I’ve noticed. I hope that can change in the future. Male athletes should be able to be just as open and honest about their sexuality as females.

Outside of the locker room is where some uncertainty laid for me.  I was more worried about what other athletes or peers would say about me, or if people would treat me lesser just because of how I identified. Looking back, I realized that all of that really doesn’t matter to me. If people chose to say ignorant things about me, that’s their own issue. That won’t change anything about me. I know that if someone was talking about me in a negative way, whether it be about my sexual orientation or not, and a teammate of mine was around to hear it, that they would step in and stand up for me. I would do the same thing for any of them. We’re a family, and that’s what families do.

On the back of one of the training shirts we designed, it says “Our Family v. Your Team”. This concept really spoke to me. We were all united to achieve a common goal, and I had the opportunity to do that in such a way that I could be honest and wholly myself.  My teammates let me feel not only accepted, but also embraced and loved.

Sports are not a heterosexual privilege. Being an athlete is wonderful experience and I would recommend it to ANYONE, especially members of the LGBTQ community. The sense of fulfillment and happiness I get when I play soccer is electrifying. Finding your passion and going about it with a truthful manner is something everyone should do, regardless of sexual orientation. Being comfortable and truthful with yourself makes you a better and more confident athlete and person.

The obstacles that members of the LGBTQ community face are due mostly to people that simply do not know better and think that intolerance and hate is normal. If you are an athlete you also are a role model. Be the person who helps those that don’t understand to comprehend how their behavior affects the team as a unit. Team chemistry should not be broken because someone doesn’t realize they are being offensive.

Do not let your internal struggle limit yourself from happiness; moreover, the happiness of the entire team. Stand up, be out, and change the framework of athletics simply by being yourself.