Experiences and Perceptions of Gay and Bisexual Fraternity Members From 1960 to 2007: A Cohort Analysis

Reprinted by Campus Pride with permission from the Journal of College Student Development on January 20, 2014 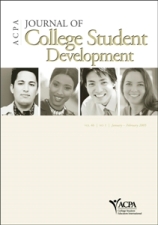 The study included 337 self-identified gay and bisexual fraternity members, with 170 joining their chapters in the year 2000 or after, 99 joining their chapters between the years 1990 and 1999, and 68 joining in the year 1989 or before. Participants who self-identified as gay or bisexual men and who joined in the year 2000 or after reported a more positive experience overall as fraternity members than did the participants who joined at any time prior. Each new cohort showed movement toward a more accepting environment for gay or bisexual individuals. The data suggest that the fraternity environment is increasingly becoming more accepting of gay and bisexual individuals and the LGBT community.