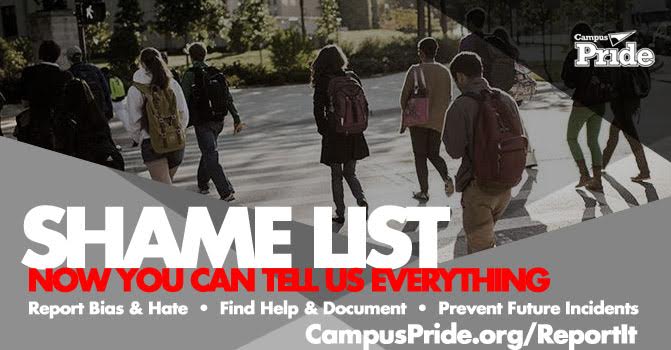 Campus Pride asks victims of bias, discrimination, and hate to “ReportIt: Now You Can Tell Us Everything” with a new campaign launching its online reporting form. The #ReportIt form is available online at CampusPride.org/ReportIt

Campus Pride seeks to document bias, discrimination and hate on campuses, specifically those that have anti-LGBTQ policies, programs and practices and, or are on Campus Pride’s Shame List of the worst anti-LGBTQ campuses in the nation.

“Many of the worst anti-LGBTQ campuses are also the worst at ignoring or hiding incidents of bias, discrimination and hate that happen on their campuses,” said Shane Windmeyer, Executive Director of Campus Pride. “The only way in the past that we have learned about horrific bias, discrimination or religion-based bigotry is if the individual was brave enough to come forward — or perhaps it was on a Facebook post. Now there is a way for any individual to report directly to us, and anonymously if they choose to do so.”

According to Campus Pride, the #ReportIt form will be a vital tool for the organization to further understand the real impact and toll of religion-based bigotry that LGBTQ students face at colleges and universities. If the individual chooses to do so, Campus Pride may also advocate and bring further visibility to these acts nationally.

“In my experience, many students don’t know how to report or that they can report LGBTQ incidents. These students are scared especially at religious schools, they’re worried they’ll be shunned, shot down or even possibly kicked out,” said Donald Scherschligt, a campus organizer for Campus Pride. “By providing this resource, students can #ReportIt to an organization they can trust, who can work with them and provide guidance on their individual case.”

Since the release of its Shame List in December of 2015, Campus Pride monthly continues to receive messages about bias incidents and discrimination concerns from students and faculty across the nation. The #ReportIt form formalizes the process of receiving these accounts and it also allows Campus Pride to do further outreach to collect data. Reports may be anonymous and, or for reporting purposes only.

“The only way we can work to improve the campus climate is by lifting the veil of secrecy around LGBTQ bias and discrimination.  We encourage all individuals to use this #ReportIt form,” Windmeyer said.