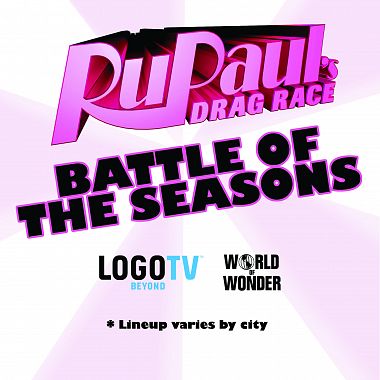 On March 11th the students from Central Michigan University attended RuPaul’s Drag Race: Battle of the Seasons. It was half of the group’s first drag show, so to have Ru’s girls be their first impression was a once in a lifetime experience.We volunteered at the event collecting names and emails from patrons to put them on the Campus Pride mailing list. This allowed us to see the queens before the show started.

It’s one thing to see the queens on the computer or television, but to see them up close and in person was an entirely different event. The first thing I was taken aback by was just how tall they were. Their natural height in addition to their heels made them towering, imposing women that I was in awe of. Their makeup was flawless, their outfits stunning, their bodies gorgeous. I was absolutely starstruck as I watched them interact with everyone. I had a great conversation with my favorite drag queen Ivy Winters and learned that she just moved to Ann Arbor, Michigan. She was so personable and easy to talk to, as were the other queens.

Michelle Visage kicked off the show with a bang, sharing her story about why she became such a strong advocate for the trans and drag community. After that, it was off to the races. Alaska 5000,  Adore Delano, Jinkx Monsoon, Sharon Needles, Detox, Bianca Del Rio, and Ivy Winters danced and sang their way into the hearts of everyone present. They even completed mini-challenges just like on the show. Drag is truly an art that these women have perfected, truly embodying the personalities of their characters.

Going to drag shows always has warmed my heart. I love how free everyone is to express themselves the way they want. The eccentric is encouraged and embraced. I looked around at everyone and thought about the path each of them took to get to where they were at in that moment. The LGBTQ community is a strong and resilient one that has faced adversity in ways that heterosexual individuals will never understand. It is at places like drag shows that people of all different sexual orientations and gender identities come together to celebrate the amazing LGBTQ culture, and there was no finer display of it than at RuPaul’s Drag Race: Battle of the Seasons.

Mari Poindexter is a graduate student at Central Michigan University serving as a volunteer for Campus Pride. Mari is working on her Master of Business Administration degree and hopes to pursue her doctorate to become a collegiate instructor.