This post was originally seen in an AIDS United Newsletter on October 9, 2015 and is being reposted on Campus Pride blog for World AIDS Day. 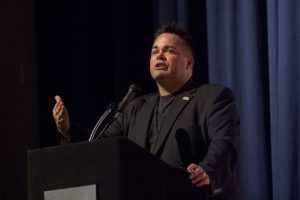 The need for heightened HIV/AIDS awareness is especially important on college and university campuses. Many college-aged LGBTQ students did not live through the start of the AIDS epidemic, and may not fully understand the pain so many LGBTQ people experienced during that time. There is a dichotomy of assumptions when it comes to HIV/AIDS in college and university communities that must be addressed. The first assumption, common among LGBTQ communities, is that HIV/AIDS was a major issue in the past that is no longer present. The second assumption, often found in non-LGBTQ communities, is that all LGBTQ people probably have HIV/AIDS and should be treated differently because of risk of transmission to non-LGBTQ populations.

Promoting safer sex practices that reduce the risk of HIV/AIDS transmission is vital to our youth communities. College and university students should also understand that while they need to take the risk of HIV/AIDS seriously, there are many people living with HIV who are able to lead full lives due to medical advancements. We need medical professionals that often see young adults as patients to understand the unique challenges the LGBTQ community faces, and how the medicalization of sexuality and gender identity leads to skepticism of medical institutions among many LGBTQ youth.

While today’s LGBTQ youth are removed by time from the AIDS epidemic of the 1980s, the stigma associated with LGBTQ youth, especially gay and bisexual men of color and trans women of color, still exists today. Healthcare discrimination, housing discrimination and harassment based on untrue stereotypes about LGBTQ people still exist because of misinformation about HIV/AIDS. Today’s college and university students need allies willing to fight against this stigma that denies so many youth their true potential.

We must fully support all members of the LGBTQ community, and not discriminate within the community based on status by having honest and open conversations about HIV discordance in relationships. It’s time to end the assumption that people living with HIV/AIDS cannot have healthy and loving relationships.

As the executive director and founder of Campus Pride, the nation’s leading nonprofit advocating for LGBTQ students on college and university campuses, I know that all LGBTQ students could benefit from changes in campus programs, policies and practices that address anti-LGBTQ stereotyping based on a person’s perceived or actual HIV/AIDS status.

During the 90’s, when I went to college in Kansas, I knew how alone and isolated it can feel for a young person. News headlines about HIV and AIDS were part of my coming of age as a gay man. I recall vividly my college activism around safer sex and HIV awareness and marching in the 1993 March on Washington with ACT UP!, a direct action group dedicated to improving the lives of people with AIDS. Still today, the stigma and prejudice associated with HIV/AIDS persists and we must continue to fight for prevention and access to testing and treatment services.

Ending the stigma that surrounds HIV/AIDS will help LGBTQ youth feel comfortable getting tested for HIV/AIDS and help them receive up-to-date information about treatment options if positive. Students need university healthcare options that cover testing and that provide realistic options for accessing treatment for HIV positive students. LGBTQ students on college campuses need to be able to enter a classroom, residence hall or locker room without worrying that their peers will view them differently because of associations between HIV/AIDS and the LGBTQ community.

With fall semester in full swing, we should think deeply about how we are connecting our youth with the knowledge and services they need to know their status, their options and the policy changes they need to live up to the potential we all know they have. As LGBTQ people from earlier generations, we need to acknowledge that we can always continue to learn from our LGBTQ youth about HIV/AIDS and how it affects our youth who have intersectional identities, as well as identities that may not have been widespread during the 1980s, such as non-binary communities. We should share our stories and listen to others. We must work together to continue understanding and combatting HIV/AIDS in our communities. Now is the time to be even more direct and to fight harder.

One Response to Fighting HIV/AIDS on College and University Campuses: Generation to Generation