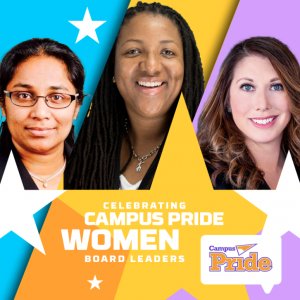 March is Women’s History Month. This year, Campus Pride is celebrating the women on our Board of Directors.

The Campus Pride Board of Directors is made of individuals who wholeheartedly believe in the mission and purpose of the organization and its support of LGBTQ youth. Campus Pride intern Laryn Jackson interviewed members Swapna Velichety, Dr. Mecca Marsh and Whitney Hill to highlight who they are and the importance of their work.

Campus Pride Board Member Swapna Velichety has always had a passion for public speaking, engaging in conversation and facilitating group activities. Born and raised in Tirupati, India, Velichety was surrounded by educators like her parents, grandparents and younger brother.

After receiving an undergraduate degree in computer science, she realized that that career wasn’t for her. At the age of 24, she left India to attend The University of Texas at Austin to receive her master’s degree in accounting. A lot of pressure came with being the first in her family to move to the United States, but Velichety had the support of her family behind her. 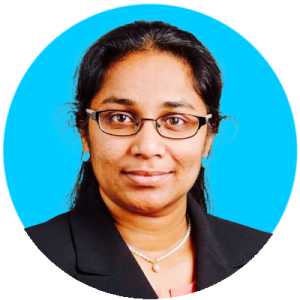 Velichety is a senior manager at PwC, an accounting firm. At PwC, they encourage senior leaders to volunteer and commit to social justice causes. Youth empowerment and education are important to Velichety, which led to her involvement with Campus Pride.

Velichety expressed concerns about being a member of Campus Pride’s board as an ally instead of a member of the community. The other Campus Pride board members encouraged her to feel comfortable being uncomfortable. They gave her space to ask questions and learn as an active LGBTQ ally.

What being an ally means to Velichety

“Being an ally is when you actually put yourself out there and stand up for a cause. If you want to be an ally, get out there and do something tangible. Don’t just be a spectator and think in your mind that you are an ally. It’s more important for people to see you as an ally than to see yourself as one,” says Velichety.

Campus Pride is Velichety’s first and only board role. She hopes to gain experience in supporting nonprofits and championing social causes. As a board member, she’s fundraised and developed policies, but she knows that there’s more to being a true ally.

Velichety encourages other allies to start small when rooting for a cause because small things add up. Before working with Campus Pride, she started by having conversations with her family about LGBTQ issues. She hopes to leave behind a legacy of being just and fair by creating equal opportunities for everyone. She believes that she’s succeeded even if just a handful of people follow her lead.

“I want to be a leader who inspires others and motivates people to do hard things and stand up for good causes. That’s something I constantly strive towards,” says Velichety.