In 2011 Elmhurst College created big waves in higher education waters by simply adding one question to their university application: “Would you consider yourself a member of the LGBT (lesbian, gay, bisexual, transgender) 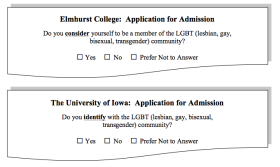 Figure 1. Identifying LGBT Applicants: Elmhurst College and the University of Iowa. Adapted from (a) “Elmhurst College: Application for Admission,” 2012, retrieved from http://media.elmhurst.edu/documents/Elmhurst_Application_2012.pdf ; and (b) “University of Iowa Will Ask Applicants if They Identify with Gay Community,” by E. Hoover, 2012, Chronicle of Higher Education, 59(17), p. 11.

At that time Shane Windmeyer, Campus Pride executive director, commended Elmhurst. “The move by Elmhurst administrators to include this question represents a distinct and unique paradigm shift in higher education to actively recognize out LGBT youth populations and to exercise greater responsibility for LGBT student safety,” said Windmeyer. “For the first time, an American college has taken efforts to identify their LGBT students from the very first moment those students have official contact with them. This is definite progress in the right direction — and deserves praise.”

Three years later, there are only a few other institutions, such as University of Iowa and Washington State Community Colleges, that have standard LGBT identity-based practices being used for tracking retention and matriculation of LGBT students at other colleges aside Elmhurst.

F. Lee Casson, Ed.D, alongside Campus Pride, has now published “Implications of Quantifying Sexual Orientation During the Admissions Process” a study with intention to ascertain the various positive and negative implications that surround a demographic for sexual orientation in a college application.

“What we’ve heard from students, especially LGBT students, is that they don’t find out about support services and organizations until they’ve been here for a year or two. [Sending out LGBT information after receiving an application] allows us to [increase our] personal outreach” (Hoover, 2012, para. 8)

As LGBT outreach becomes more common within academic spaces, very few institutions have considered Elmhurst’s approach—that is, to target LGBT students before arriving on campus rather than afterwards.

According to this study universities can collect this demographic data during the admissions process, and with such institutions are able to connect enrollees with various on-campus services and organizations. Thus, any student who identifies as lesbian, gay, bisexual, or transgender while filling out an application could subsequently receive LGBT materials from the institution.

The most important finding in this study centered upon the concept of tracking:

Without an identifying LGBT demographic, an institution cannot measure matriculation, retention, or graduation rates for LGBT students, nor can it assess these students in comparison to their peers.

Campus Pride recognizes the importance allowing options for LGBT students to self-identify to their institution. These data collections assist universities in better serving their LGBTQ students and allows for strategies to be developed that should strengthen an institution’s commitment to campus diversity.

Campus Pride recognizes that all students, especially those who are LGBT identifying, should feel welcomed, safe and accepted in their chosen academic environment. Campus Pride commends colleges and universities such as Elmhurst College, the University of Iowa, the University of Pennsylvania and any others who are adopting these practices.

You can see the results and learn more by downloading the full document.