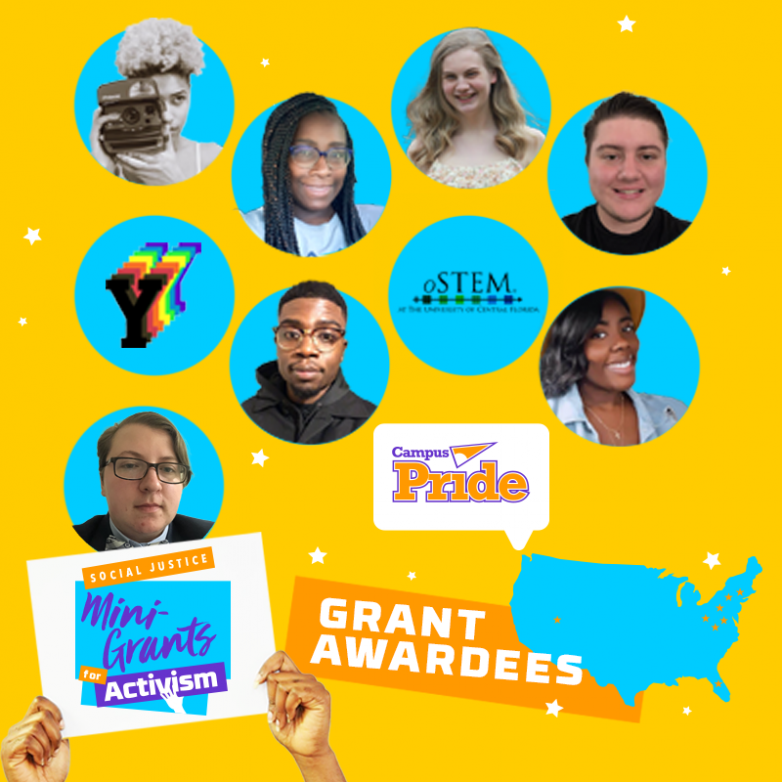 In honor of Campus Pride’s 20th Anniversary, we have launched our Social Justice Mini-Grants for Activism. The program offers grants of up to $600 to student activists involved in social justice work on their college campuses. This past week, Campus Pride announced the first ten recipients of the mini-grants. LGBTQ college students can apply now for the next round of student social justice grants. To learn more, visit campuspride.org/ActNow.

Find out more about our grant awardees at campuspride.org/SocialJusticeMiniGrantFunding.

Boyd wants to provide basic essential items to LGBTQ homeless youth. She will package care packages with toiletries, clothing, and menstrual projects to give to a LGBTQ youth support shelter for the homeless.

Student organizing and advocacy to protect LGBTQ students on campus

Dawkins is petitioning the University of Connecticut administration and undergraduate student government to protect LGBTQ students. “This legislation is a list of demands coming from queer, trans, and allies and directed towards the UConn administration. It will be parcellized by topic and brought to the main branches of the administration that are failing to protect students,” says Dawkins.

Lehew and another Penn State student are curating an art gallery on campus that displays LGBTQ artists’ work. “All of the money earned from the sale of artwork will be placed into a fund. With this fund, we plan on creating grants on campus to help students pay for gender affirming surgeries,” says Lehew.

Lichtman is currently working on a workshop performance of a play with a cast almost entirely of LGBTQ artists, most of them trans women. Lichtman plans to donate the proceeds to the Jim Collins Foundation and/or ensemble members.

Reilly is developing a mentorship program called LGBTea+. This program targets college students and helps them establish relationships with queer professionals and focuses on the importance of intersectionality in the LGBTQ community. “This mentorship experience will focus on developing these young students’ professional, academic, and social lives within a queer context, and provide them support as they prepare for their careers,” says Reilly.

Shill is the president and founder of BYU Pride, an organization that celebrates progress made by LGBTQ activists at BYU and advocates for LGBTQ students on campus. “BYU Pride has gained a lot of attention for having put on the first-ever pride march, so we need to keep the momentum by planning large scale community events. In the past, we have planned successful events with a lack of funding. We hope to scale up our events with this grant,” says Shill.

St. Louis is working on a course focused on the experience of Black gay men and the prevalence of crystal methamphetamine use, including the unique challenges they and the therapist face in treatment. This course will be designed to build awareness among community members and promote the administration of safe and effective supportive care.