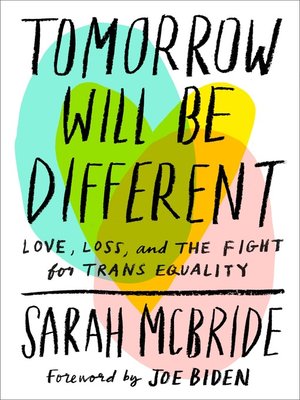 Sarah McBride is an unwavering advocate for the transgender community. As the current National Press Secretary for the Human Rights Campaign, she brings attention to the many difficult issues that members of the LGBTQ+ spectrum experience. In this work, she dives head first into the profound journey that is her life.

As a young child, McBride knew that she was different: she recounts the comfort she had in wearing Disney princess costumes and the happiness she experienced when wearing makeup. We learn about her love for history and politics, and her childhood dream of one day becoming a U.S. President. We then follow her early career in politics in her home state of Delaware working for Governor Jack Markell to Attorney General, Beau Biden. Through recollections of her upbringing, we also learn about her internal conflict – coming to terms with the persistent feeling that she was not the gender assigned to her at birth. The journey of acceptance and transformation begins with her viral Facebook post in which she publicly comes out as a transgender woman in her last days as student body president at American University.

McBride’s story of becoming herself is an embodiment of resiliency and hope captured in her career as a social justice advocate. We first follow her career, after having come out, as a White House intern under President Obama’s administration. Becoming the first openly transgender woman to work in any capacity at the White House, she worked under the Office of Public Engagement advocating for identity-based communities across the nation. We are then taken back to Delaware where she helped pass both the Marriage Equality Bill and the Gender Identity Nondiscrimination Act of 2013, protections unparalleled throughout the United States, even today. We continue to follow her career as she advocates for transgender inclusive policies at the Center for American Progress.

As her career begins to flourish, so does her personal life. She falls in love with Andrew Cray, a transgender man and fellow activist. It’s a love for the ages as the two fight together for change in their community. However, their happiness is fleeting as Andy is diagnosed with cancer. After a long battle with bleak outcomes, Andy marries McBride, but passes away days later. Despite these tragic events, McBride continues the fight for equality knowing that Andy is with her in spirit.

McBride creates a personal connection with the reader and explores the strength that can come from hardship and personal strife. Tomorrow Will Be Different: Love, Loss, and the Fight For Trans Equality is a must read for individuals that are not aware of the discrimination that the transgender community encounters. In a book that is likely to resonate and connect with any reader, as well as bring tears to any eye, McBride brings home the struggle that each of us endure when living life: staying true to ourselves.