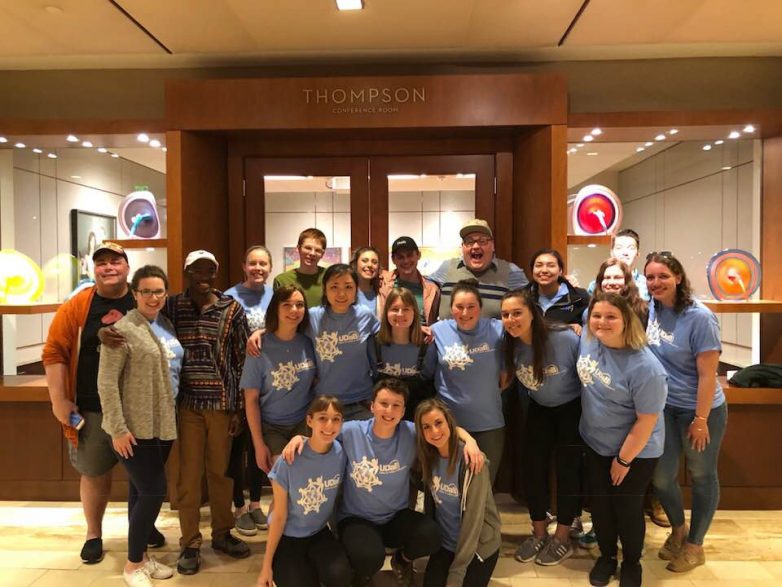 On our first day we were welcomed by Campus Pride founder, Shane Windmeyer, into the “Foundations of the Carolinas” building where we would spend our first day in the Richardson Conference room. Shane spent majority of the day explaining the origins of Campus Pride, the goal of the organization, the inner framework of the organization, the resources it offers and projects it works on, as well as what we would be doing during our week of service in North Carolina at Campus Pride. As members of the University of Delaware community, it was interesting to see UD’s rating on the Campus Pride ‘campus index’ as well as the resources offered or missing on campus. It was also interesting to hear Shane’s story and gain a perspective on his vast knowledge and understanding of the LGBTQ+ community, and its intersections to other communities, through general discussion, Q&A, and discussion of service projects our group would be working on throughout the week.

On our second day of service we were fortunate enough to meet and talk with Roberta Dunn, a transgender woman and good friend of Shane. Roberta welcomed us into our second day of service with her famous and exclusive “HRC” cookies (homemade Roberta cookies). Roberta shared her experiences as a trans woman coming out later in life and how her younger radical self has followed suit into her current, and still importantly, radical advocacy for transgender people in North Carolina. Through her willingness to share her personal struggles, challenges, and experiences in accepting, expressing, and sharing her gender identity with others, we were able to learn more about the unfortunately common struggles transgender people face institutionally, socially, and personally in their local communities, and specifically in North Carolina.

We spent the rest of the day working on our first ‘service project’ which consisted of reaching out to previous Camp Pride and Advisor Academy attendees via email and phone calls to hopefully get publicity and participants for the upcoming Camp Pride in summer 2018. This included informing people of the summer programs offered, emphasizing current registration discounts, and reconnecting with past Camp Pride attendees. In doing this, participants on our trip gained exposure to the inner workings of nonprofits and the often tedious and draining work that is typically required of its employees and volunteers.

Following this day of work, our group felt a lot of frustration toward the work we had been doing via phone calls and emails. We began to question the worth and meaning of the work we had been doing and felt that we wouldn’t learn anything about the LGBTQ+ community from the work being done. The work felt draining and tedious and we began to wonder why Shane had us doing this work.

On the third day of service Campus Pride gave to me………… two free shirts, lots of donor calls, pies of pizza, and a drag show for students from UD *cue 12 days of Christmas song*.

Similar to Day 2, day 3 at Campus Pride focused on reaching out to people via telephone calls and emails in hopes of reaching out to potential donors to raise money for “Give Out Day.” Give Out Day is a national day of giving for LGBTQ+ related nonprofit organizations. On this day LGBTQ+ related nonprofits have the opportunity to attract more donors, motivate and engage their current donors and supporters, and raise awareness of their nonprofit. These nonprofits also then have the chance to win bonus money, based on the number of donors they receive monetary funds from, which translate into programs and services offered by the nonprofits. Seeing that Campus Pride heavily relies on outside funding to keep its programs running, events like Give Out Day are essential to keeping their programs running.

As previously mentioned, going into day 3 our group was skeptical of the work Shane would have us doing. After much discussion and reflection outside of Campus Pride, our site leaders took the initiative to voice many of our concerns to Shane. On this work day Shane took the time to address many of our concerns and explain the importance of the work he had us doing. He explained he was short on staff and abundant in responsibilities and the work of volunteers, though tedious, helped complete several smaller, yet important, projects.

Though this work was not what was expected by the vast majority of our group, through reflection and discussion on our groups own time outside of Campus Pride, as well as Shanes willingness to take the time to explain to us the importance of the work we were doing, our group was able to recognize that we were at Campus Pride for a reason. That reason being, we were there to do the work asked of us by Campus Pride; so we did.

After the work day came to a close, Shane invited us to attend a drag show happening at his restaurant. While there we were able to learn more about Drag and meet some of the drag queens performing that night!

On day 4 of our time at Campus Pride we began to recognize that our time here was dwindling down.

Our work on this day consisted of creating videos and memes to send out to celebrities, via social media platforms like Twitter and Instagram, to raise money and awareness for National Give Out Day.

After a long day of work and creativity, we were invited to attend a viewing party to watch an episode of Rupaul’s Drag Race, also hosted at Shane’s restaurant. While there, we sold t-shirts and handed out flyers to bring awareness to the up and coming National Give Out Day. We were also able to meet one of the drag queens on the show, Eurika, who was hosting the viewing party. Getting to meet her was a fabulous end to our fourth day at Campus Pride.

Our fifth and final day at Campus Pride was that of a relaxed one. We met up with Shane right where we started our week with Campus Pride: in the Foundations for the Carolinas building.

While here we met with an employee from Wells Fargo who identified as an out and proud white cis gay man. He spoke to us about his involvement in Wells Fargo as a gay man, Wells Fargo’s said commitment to diversity and how it plays out in the workplace, and answered all of the questions our group had for him. While talking to him our group was able to learn about and reflect on what we perceived as Wells Fargo’s current climate toward diversity and more specifically, the LGBTQ+ community. Although our group and the Wells Fargo representative differed in opinion and perspective on certain issues and ideas, it was nonetheless interesting to have a conversation with an LGBTQ+ community member present in the North Carolina area.

After meeting with the Wells Fargo representative, we were then able to hang out with the drag queen, Eurika, who we had previously had the pleasure of meeting at the Rupaul Drag Race viewing party. We were able to hang out with them and get to know them better, learn more about their experiences as a genderqueer person, learn more about their experiences as a drag queen on Rupaul’s Drag Race, and overall just hangout with an active member in the community. Eurika provided us with insight into the LGBTQ+ community present in North Carolina and the work they were currently working on.

We ended our time at Campus Pride with a conversation about what we had learned during our time here and what we could take away with us to UD.

We would like to thank Shane and Campus Pride for allowing us to work with them for the week and learn more about the work that Campus Pride does!