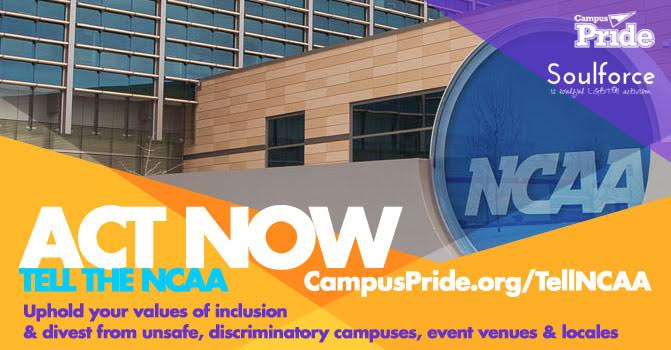 Be sure to send this message TODAY!

Discrimination is wrong.  The NCAA must uphold its values of inclusion and divest from unsafe, discriminatory campuses as well as event venues and locales.

Campus Pride and Soulforce need you to write the NCAA President Mark Emmert at this critical moment and let him know that the NCAA must live up to its ideals and be a bold, inclusive leader on and off the court. This not only includes where the game is played but also in creating safer, inclusive campuses for all student athletes and fans.

To be clear about what our community needs, Campus Pride and Soulforce developed this “NCAA Checklist for LGBTQI Sports Inclusion”:

1. Do not allow any NCAA events to be held at schools that discriminate against LGBTQ people or have Title IX religious exemptions.

2. Do not allow schools that discriminate against women or LGBTQ people or have Title IX religious exemptions to participate in NCAA sports.

3. ​Do advocate for LGBTQ inclusion in all aspects of NCAA participation and affirm the contributions of LGBTQ student athletes.

4. Do require NCAA campuses to have affirming policies and procedures enabling transgender and intersex student athletes to participate consistent with their gender identity​.

5. Do ask for NCAA campuses to have policies and procedures in place to address anti-LGBTQ behavior from athletes, coaches, athletic staff and fans.

7. Do provide or promote ongoing trainings for coaches, staff and student athletes to better practice inclusion of sexual orientation and gender identity/expression.

8. Do require schools to be open and accountable regarding their policies and practices regarding Title IX and creating a culture of fairness and inclusion for LGBTQ people.

9. Do fund ongoing opportunities, research and meetings for the NCAA to hear from women and LGBTQ students from Christian schools and other NCAA schools that are most affected by religious discrimination.

10. Use the platform and political power of the NCAA to be an outspoken ally and prevent proposed laws that would roll back LGBTQ rights, deny public accommodations for trans people, or legalize religious discrimination.