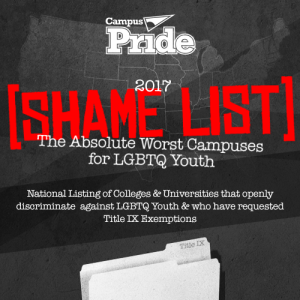 (Charlotte, NC – September 13, 2017) Campus Pride today releases its 2017 Shame List highlighting for the second year in a row a national listing of “The Absolute Worst Campuses for LGBTQ Youth.” Up from 102 campuses last year, the national listing includes 139 campuses that openly discriminate against LGBTQ youth in policies, programs and practices as documented on the site listing.   Find the detailed list online at CampusPride.org/ShameList

According to Campus Pride, the 139 campuses have a learning environment that is not supportive and “not safe” for LGBTQ people, particularly transgender students, staff and faculty. Seventy of the colleges listed have received Title IX religious exemptions to allow discrimination against LGBTQ people and 32 campuses have pending Title IX exemption requests. This is up from 58 campuses last year holding discriminatory Title IX religious exemptions and 17 campuses having pending requests.

“The Shame List uncovers the religion-based bigotry that is unsafe, harmful and perpetuates harassment toward LGBTQ youth. Everyone has a right to know that these ‘absolute worst campuses for LGBTQ youth’ do exist and what they are doing to discriminate in policies, programs and practices,” said Shane Windmeyer, Executive Director of Campus Pride. “That is what the Shame List does as a resource for youth and families – it gives them all the information to make the best decision for their young person, where they will be safe and feel welcomed.”

Under the Obama Administration, the United States Department of Education began to publish the letters of campuses requesting Title IX exemptions online in Spring 2016.  Campus Pride has filed for Freedom of Information Act (FOIA) requests quarterly and also receives bias reports through its website.  The criterion to be the “absolute worst” campus includes, at minimum, either of the following: 1) Received and/or applied for a Title IX exemption to discriminate against LGBTQ youth and/or 2) Demonstrated past history and track record of anti-LGBTQ actions, programs and practices.

“Now more than ever we need the Shame List as a resource. Schools on this list must do a lot better, developing faith leaders of tomorrow,” said Donald Scherschligt, a recent college student at Westmont College, one of the colleges on the Shame List, and the volunteer program manager working on this project with Campus Pride. “The Shame List plays a vital role not only in helping youth make choices on where to go to school, but also in calling out, and holding the campus officials accountable, for the religion-based bigotry and harm where it begins – on these ‘absolute worst’ campuses.”

“That is when you know you are doing something important and begs the question: ‘Why are these campuses concerned about letting people know that they have a Title IX religious exemption that discriminates against LGBTQ people or anti-LGBTQ actions, programs and practices. Why?,’” Windmeyer said.

This is the second year Campus Pride has released a listing of the worst anti-LGBTQ campuses across the country. Annually Campus Pride releases a “Best of the Best” listing highlighting college campuses with the most inclusive LGBTQ-friendly policies, programs, and practices. The 2017 Best of the Best list can be found online at Campuspride.org/2020bestofthebest. The full listing of 250+ LGBTQ-friendly campuses can be found online at CampusPrideIndex.org

“If you have an anti-LGBTQ policy, program or practice, put it on your Admission brochure. Otherwise Campus Pride will do it for you,” Windmeyer concluded.

A detailed Shame List can be found online at CampusPride.org/ShameList   The listing will be updated annually. Any questions, or media inquiries, please call 704-277-6710 or email info@campuspride.org