We needed you, and you stepped up to help us help LGBTQ youth. I am so thankful for you.

When we began 2020, we thought much of the year would be spent planning for our 20th Anniversary in 2021. But, our year took a turn like everyone else’s as COVID-19 struck. Because of the pandemic, Campus Pride lost some $100,000 in funding – funding that we need to actualize those plans.

So, we turned to our community – and wow, did you deliver! Our Giving Tuesday fundraising drive raised $11,950 – even more than our goal! And thanks to a generous contributor, every dollar up to $10,000 is being matched, doubling your impact! 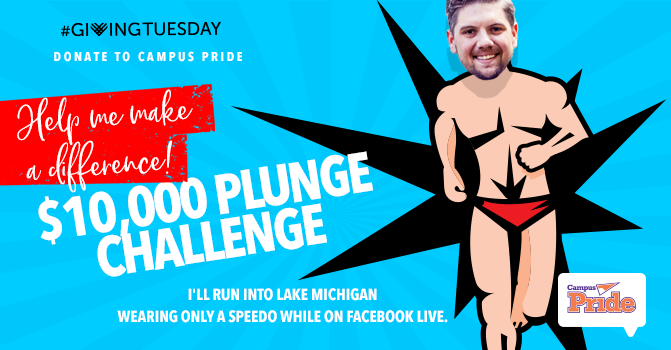 But that’s not all – our Board Chair, Tom Elliott, was busy running his own fundraising campaign, doing stunts and giving away prizes as goals were met. Late in the evening on Giving Tuesday, we got a message from a donor – if Tom agreed to keep going with his fundraising until the end of December, they’d kick in another $2,500!

Even though Giving Tuesday is over, Tom couldn’t say no to that – so if he raises another $5,000 by December 31, he’s going to make good on his promise to jump into freezing Lake Michigan in Chicago in nothing but a Speedo!

I’m so thankful for your support, and I’m humbled by the support Campus Pride has received over the past 20 years. I can’t wait to get to work on the next 20!