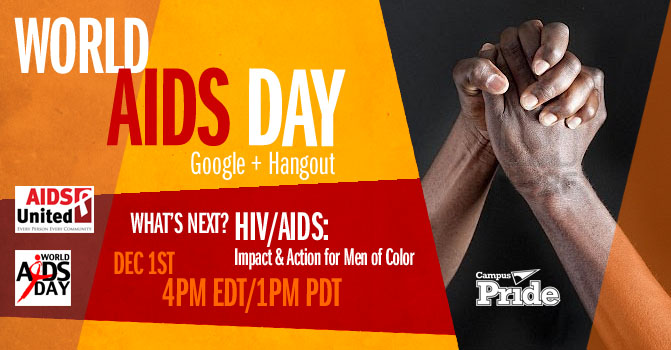 Join Campus Pride and AIDS United on World AIDS Day December 1 in a Live Google+ Hangout discussing HIV/AIDS from “Impact to Action” at 4 p.m. EDT.  This discussion will be specifically geared toward our future work and necessary actions for young men of color.  Statistics tell us that men who have sex with men, gay and bisexual men are more severely affected by HIV than any other group in the United States. Among all gay and bisexual men, black/African American gay and bisexual men bear a disproportionate burden of HIV. The focus will be addressing for/by men of color what more is needed in terms of prevention, education, treatment, awareness, etc.

World AIDS Day is held on 1 December each year and is an opportunity for people worldwide to unite in the fight against HIV, show their support for people living with HIV and to commemorate people who have died. World AIDS Day was the first ever global health day and the first one was held in 1988.

More information about taking action on HIV/AIDS from the Centers for Disease Control and Prevention:

Act Against AIDS (AAA) is a five-year national campaign launched by the Centers for Disease Control and Prevention (CDC) and the White House to combat complacency about HIV and AIDS in the United States. Launched in 2009, Act Against AIDS focuses on raising awareness among all Americans and reducing the risk of infection among the hardest-hit populations – gay and bisexual men, African Americans, Latinos, and other communities at increased risk.

For more information, read the AIDS Against AIDS original press release and the AAALI expansion announcement. Visit the AAA News page for our annual reports and newsletters.

We Can Stop HIV One Conversation at a TimeEncouraging Hispanics to talk openly about HIV/AIDS.

Let’s Stop HIV TogetherRaising awareness and fighting stigma about HIV. Get the Facts. Get Tested. Get Involved.

Take Charge. Take the Test.Encouraging African American women to get tested for HIV

View all of the CDC Act Against AIDS Campaigns and take action today.