Out on Fraternity Row: Personal Accounts of Being Gay in a College Fraternity edited by Shane L. Windmeyer and Pamela W. Freeman 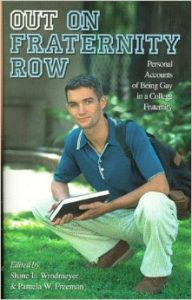 Brotherhood, friendship, and a chance to belong is the promise held out to young college men by campus fraternities. But what if the young man happens to be gay? Will his brothers accept him, or will he lose his friendships, his comrades, and his community? The first-ever book on the topic of being gay or bisexual in a college fraternity, Out on Fraternity Row  knocks down the fraternity closet door. More than 30 men join voices in this emotionally charged and important anthology to tell their individual stories of coming out or keeping silent and how this decision changed their fraternal experience, their view of themselves, and even their lives. For anyone struggling with issues of trying to belong or being true to themselves, Out On Fraternity Row will provide the comfort of knowing they are not alone. Compiled as part of the Lambda 10 Project, Out On Fraternity Row also contains important information on resources for gay fraternity members as well as advice to fraternity members and officers on how to deal with homophobia and the acceptance of a gay brother. Out on Fraternity Row is available on Kindle for Amazon for readers to purchase ($5.99) here. It is also available in the Apple iTunes Bookstore.

Secret Sisters: Stories of Being Lesbian & Bisexual in a College Sorority edited by Shane L. Windmeyer and Pamela W. Freeman 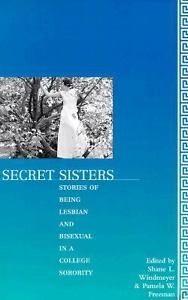 In the 1960s, Purdue officials tell a young coed she must leave her girlfriend or face expulsion. A sorority sister in the early ’80s comes to terms with her sexuality in the face of a stiflingly conservative campus. Nearly 20 years later a young woman stands up at a meeting of her sorority to proudly say, “I am a lesbian.”

In the groundbreaking Out on Fraternity Row, editors Shane L. Windmeyer and Pamela W. Freeman shattered the silence of gay men in college fraternities. Now they have turned their attention to college sororities to examine the traditionally homophobic and heterosexist atmosphere they engender. This anthology, resulting from the work of the nationally renowned Lambda 10 Project, presents 32 moving first-person accounts of lesbian and bisexual sorority sisters–stories of pain, isolation, and personal conviction that stand as a powerful and courageous effort to gain greater understanding within sororities of the true nature of sisterhood.  Also included are educational resources on how to deal with homophobia in the college sorority and how to encourage the Greek system to accept openly gay, lesbian & bisexual members. Secret Sisters is out of print and available exclusively from the Campus Pride shop. 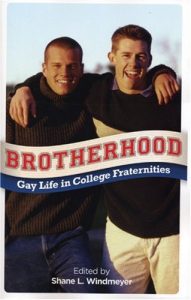 Are the bonds of brotherhood strong enough to overcome homophobia within a fraternity, even when it comes to rushing openly gay or love between fraternity brothers? Those are among the questions raised in Brotherhood: Gay Life in College Fraternities, a provocative anthology edited by Shane L. Windmeyer.

Released in October 2005, Brotherhood explores the concepts of brotherhood, masculinity and sexuality in college fraternities through a series of frank and emotionally charged essays. The book follows up Windmeyer’s groundbreaking 1998 anthology Out on Fraternity Row: Personal Accounts of Being Gay in a College Fraternity by delving deeper into the closet of fraternity life, asking questions rarely discussed openly.

Several of the first-person accounts of Brotherhood illustrate the remarkable progress fraternities have made toward acceptance over the last decade, while others reflect the necessity for a more inclusive, valued meaning of brotherhood. Rather than shying away from taboo topics, the book includes tales of homophobic hazing, suicide, sexual experimentation, alcohol abuse and religious intolerance. The issues are complex, centering on the bonds of brotherhood and how sexuality, masculinity and homophobia intertwine to shape the male experience within the college fraternity. Brotherhood is out of print but will be available soon as an e-book in the Campus Pride shop.