Ally is Not an Identity

Being an ally is more than standing up for a community even when they’re not around. 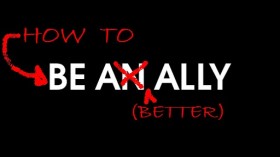