Top 50 listing features the “Best of the Best;” Number of top-rated schools increases to 50, based on growing progress in creating LGBTQ-friendly campuses 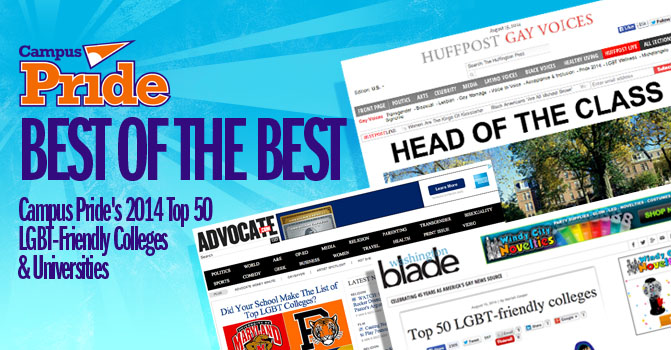 “More than ever colleges today want to be viewed as LGBTQ-friendly and a welcoming place for all students. LGBTQ students and their safety impacts the recruitment efforts of the entire campus,” said Windmeyer. “Upper-level administrators are now understanding how LGBTQ-friendliness is key to future institutional success. This Top 50 list is proof.”

This is the first year Campus Pride has released a list of the fifty “Best of the Best.” In years past, Campus Pride has only featured a “Top 25 List.” The listing is based on the final responses to the Campus Pride Index, a national benchmarking tool which self-assesses LGBTQ-friendly policies, programs and practices. The tool is free of charge and can be found online at www.CampusPrideIndex.org.

“For six years in a row, Campus Pride has seen an increase in the number of campuses coming out as LGBTQ-friendly and making notable improvements to LGBTQ academic life, so we decided to honor 50 campuses with our national distinction,” said Shane Windmeyer, Executive Director of Campus Pride and the creator of the Campus Pride Index. “Today the Campus Pride Index has over 425 campuses featured online and for the first time ever we have 56 campuses who achieved the highest 5 stars overall rating, the largest number to date.”

Unlike the Princeton Review LGBTQ rankings, the Campus Pride Index is based in research on policy, program and practice and is conducted “for and by” LGBTQ experts in the field of higher education.  Annually campuses update and use the Campus Pride benchmarking tool to improve LGBTQ life on campus. For the third year in a row, over 80% of participating colleges improved their ratings from the previous year. In addition, the number of campuses located in the South increased this year, as did the number of religiously-affiliated campuses and Minority Serving Institutions.

According to Windmeyer, “there is a lot to be learned” from the Top 50 campuses on this listing.  Many of these campuses are specifically addressing recruitment and academic retention efforts for LGBTQ students as well as concerns for transgender student safety.  The Top 50 also geographically mirrors more progressive areas of the country where there has been a history of LGBTQ support and advocacy.

“While this Top 50 list demonstrates the positive progress to support LGBTQ students within higher education, we must also commit ourselves to the campuses not on the list — in rural areas, Southern states and other types of campuses like two year colleges, Historically Black Colleges & Universities and religious-affiliated campuses – where pioneering LGBTQ work to create a safe learning environment is still a real struggle,” Windmeyer said.

According to Campus Pride, a college had to achieve 5 stars overall in order to be in the Top 50 this year as well as have the highest percentages across the eight LGBTQ-friendly benchmarks for policy, program and practice. The listing this year includes colleges with student populations from 1600 to over 50,000, public and private schools alike.   Each college listed on the Top 50 has a profile page with more details about the campus ratings online. The Top 50 list is in alphabetical order, as follows:

Please click to learn more about each campus from the Campus Pride Index.