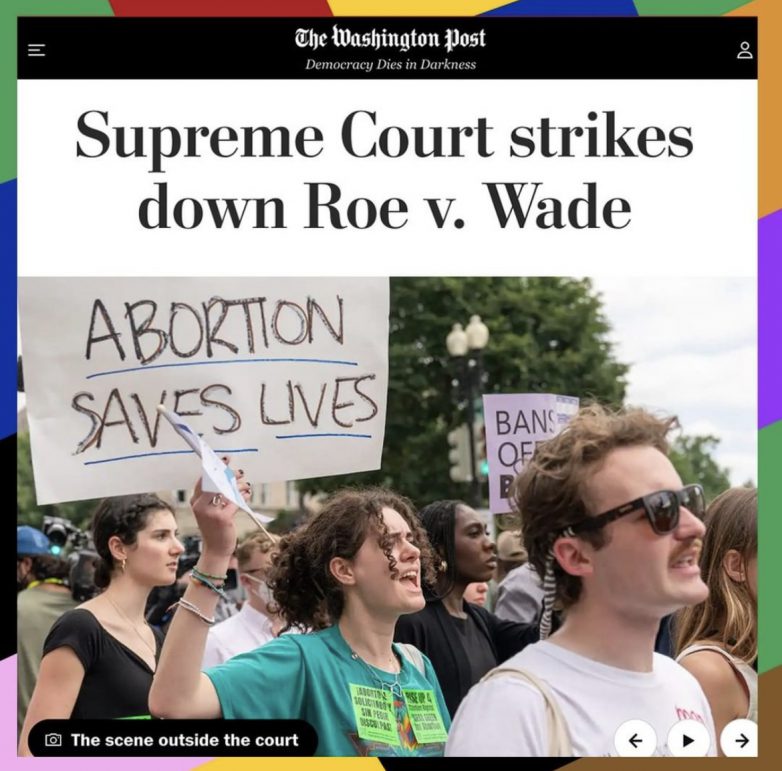 It’s been almost a month since the Supreme Court overturned the national right to abortion in Dobbs v. Jackson Women’s Health Organization. This decision has had catastrophic effects across the country and will disproportionately impact people already at the margins, especially low-income people, people of color, undocumented migrants, women, and LGBTQIA+ folks. The issue of abortion access is also an issue that disproportionately impacts young people and LGBTQIA+ students, making it an issue not just of women’s rights, but LGBTQIA+ equality, socioeconomic justice, and access. Guaranteeing affordable, accessible, and legal abortions on the national level is crucial to ensuring comprehensive reproductive healthcare coverage for students on college campuses and the communities they are a part of.

Abortion is listed as an essential healthcare service by the World Health Organization and has been proven to be safe and effective in the United States. Abortion is the only treatment for ectopic pregnancies, and uses similar procedures as healthcare for people who experience miscarriages. It is a critical piece of healthcare, and 1 in 4 American women get an abortion by the age of 45. The prevalence and importance of abortion care to comprehensive healthcare coverage is why trigger laws in states like Missouri, where I attend university, have been so devastating. In Ohio, a 10-year old girl who had been raped was forced to travel to Indiana in order to get an abortion. In Utah, IVF patients are worried about pursuing treatment due to legal concerns about when life begins. Across the country, pregnant people who experience miscarriages have received delayed care or been denied care altogether due to similarities between medical treatments for miscarriages and for abortions.

For young people, these impacts have been particularly devastating. We have grown up with the expectation of bodily autonomy and abortion access, a right that has been steadily eroded in conservative state legislatures over the past few decades. With the overturn of Dobbs, abortion is now outlawed in 20 states and growing. Now, 65% of college students in states with abortion restrictions have considered or plan to transfer to colleges in states protecting abortion access. Young people 18-24 are also the most likely group to experience unwanted pregnancies, the reason behind a quarter of abortions, and will lose access to critical health services as state legislatures shut down abortion clinics and access. These impacts will disproportionately harm the most at-risk groups, including low-income students, who are most likely to lack the financial resources for travel and healthcare, and students of color, who experience healthcare discrimination and higher levels of maternal mortality (especially Black women, who have the highest rates of maternal mortality in the country).

Abortion is also an LGBTQIA+ issue because people of all genders, including trans men, non-binary, and gender-expansive people, get abortions. However, only 23% of clinics provide gender-affirming care, indicating gaps in healthcare coverage that restrict access and inclusion for trans and gender-expansive people seeking reproductive healthcare. Queer people are also at disproportionate risk of experiencing sexual violence: the Human Rights Campaign found that one half of transgender people and bisexual women will experience sexual violence in their lifetimes, a rate 3-4 times the national average for women and 16-17 times the national average for men.

Outside of the context of abortion care, LGBTQIA+ rights are also threatened by the most recent ruling because the right to privacy is a foundation for protecting LGBTQIA+ rights. Justice Clarence Thomas threatens these rights under his dissent, where he writes: “in future cases, we should reconsider all of this Court’s substantive due process precedents, including Griswold, Lawrence, and Obergefell. […] Because any substantive due process decision is ‘demonstrably erroneous’ […] we have a duty to ’correct the error’ established in those precedents.” In other words, the rationale of the Dobbs decision – which eroded the fundamental right to privacy – can be seen as a challenge to other established rights from the Supreme Court, including the right to gay marriage offered through Obergefell; the right to engage in private sexual acts protected in Lawrence; and the right to access contraceptives, enshrined under Griswold.

Contextualizing abortion care and the legal battles surrounding Dobbs with its disproportionate impacts on students, especially LGBTQIA+, BIPOC, low-income, and undocumented students offers a more comprehensive understanding of the catastrophic implications of abortion restrictions across the United States. In the last several decades, as 50 countries have expanded access to abortion care, the US is one of only a few that has increased restrictions. With the repeal of Roe, the US will become one of the only industrialized countries on Earth to have substantial restrictions or bans on abortion access.

Abortion care is an issue about racial, socioeconomic, gender, and social justice. As students, we must organize to protect abortion access and reproductive freedom on our campuses to protect healthcare access, bodily autonomy, and equitable access. If you are looking to get more involved, you can compile abortion resources in your region, lobby your university health center to offer abortion pills, or work with your student government to send out information to the student body. Outside of campus, you can sign up to be a clinic escort, lobby your state legislature against abortion restrictions, and organize people to vote – both for pro-choice candidates and in favor of abortion access in states like Kansas, California, Vermont, and Kentucky. If you have the financial means, please donate to abortion funds and organizations working to protect reproductive freedom in the US such as NARAL, Planned Parenthood, the ACLU, and the Center for Reproductive Rights.

Before the decision of Roe in 1973, it was networks of American organizers who extended abortion access to pregnant people who needed it the most by coordinating rides, protests, and lobby days. They understood that our advocacy had to be inclusive, and serve those at the margins – especially low-income women who were far away from a clinic where they could safely get the procedure. By drawing inspiration from their struggle for the fundamental right to get an abortion, we can protect reproductive freedom on our campuses, in our states, and in our country.