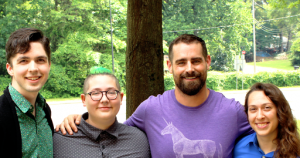 On June 2, 2016, the Campus Pride Summer Fellows had the opportunity to meet one-on-one with Representative Brian Sims, Pennsylvania’s first out legislator. In 2000, Rep. Sims became the first openly gay college football captain in NCAA history while studying at Bloomsburg University. He later went on to lead various organizations and groups in Pennsylvania, including Equality Pennsylvania and the Gay and Lesbian Lawyers of Philadelphia. Rep. Sims was later elected to the Pennsylvania House of Representatives in 2012 as a representative of the 182nd Legislative District of Pennsylvania, where he became the first out LGBTQ legislator in Pennsylvania history. He is currently up for re-election in the 2016 election and spent some time at the Campus Pride office discussing identity, privilege, and politics.

Lisa: Thanks for joining us this afternoon! First, we are wondering if you could tell us a little bit more about how you got where you are today?

Rep. Sims: I was sitting in the Steelworkers Union building in Pittsburgh, PA right after teaching a bunch of young people about advocacy and a bunch of the other fellows pulled me aside and said, “You’re the person you’re looking for, you spent years and years trying to find, fund, and train an out candidate, it should be you.” It took me a while to get this idea in my head that it could be me.

I spent the next ten months running the largest, cleanest, healthiest race, I think, in Pennsylvania history. I beat [my opponent] by 233 votes. And I will remember that 233 votes for the rest of my life. With those 233 votes, Pennsylvania finally elected an out legislator and within three years of me being elected, more Republicans and Democrats are co-sponsors of LGBT legislation than any other time in Pennsylvania history.

Lisa: As a member of the House of Representatives, how do you conceptualize the relationship between your position as a politician and the wide range of identities you serve, such as women, people of color, LGBTQ people, etc.?

Rep. Sims: So one of the things that I realized really early on is that the average opponent looks just like me. The average cis white man is going to hear something from me before they’re gonna hear it from a woman of color, even if she says it ten times better than I say it. That’s crap. But that is the definition of privilege.

And so I do two things, to answer your question. I make sure that I don’t require that the people who are most impacted by negative legislation are being the only people who stand up and speak on behalf of that legislation. But I also make sure that once I’ve got an ear, the person who needs to be speaking is speaking.

Spencer: Looking back at your journey with your identity, both personally and professionally, what advice would you tell your younger self?

Rep. Sims: I wouldn’t have come out [as early]. My coming out was awesome. I think what I would change is that I would tell myself to be a lot more comfortable in this body, this person. The conversations that I’ve just had with you, I would have had with you at 13 if I had known how to. I thought for so long that that just made me inherently uncool. I thought it made me an outsider…[but] it didn’t. It meant that I was an insider and I didn’t let myself know that until I got older. When you think that you’re the only one, you behave like an island. And the truth is we’re a continent. I wish I had realized earlier on that I was part of the winning team.

Lisa: What is something that you would like to see happen for the LGBTQ community in the next 10 years?

Rep. Sims: I would like to see the LGBT community fully embrace diversity; that is the best thing that we bring to the table. I mean the rainbow might be the most appropriate symbol of who we are because we are all things and we are everywhere. We have been all things, we have been all places. Every time I get credited with being the first out legislator, I always say out is the operative word. There have been gay people in my building for all time.

I think we’re five years away from passing LGBT equality at the federal level, in a way that forces all states to have LGBT equality. Maybe we’re 50 years away from actual equality, but the legal side of this is going to be solved soon. The thing that’s going to resolve the social side of it is how diverse we are as a group. The only thing that’s going to bring full equality to the masses is us accepting how diverse we are.

One Response to Politics and Privilege: A Conversation with Pennsylvania’s First Out Legislator Rep. Brian Sims