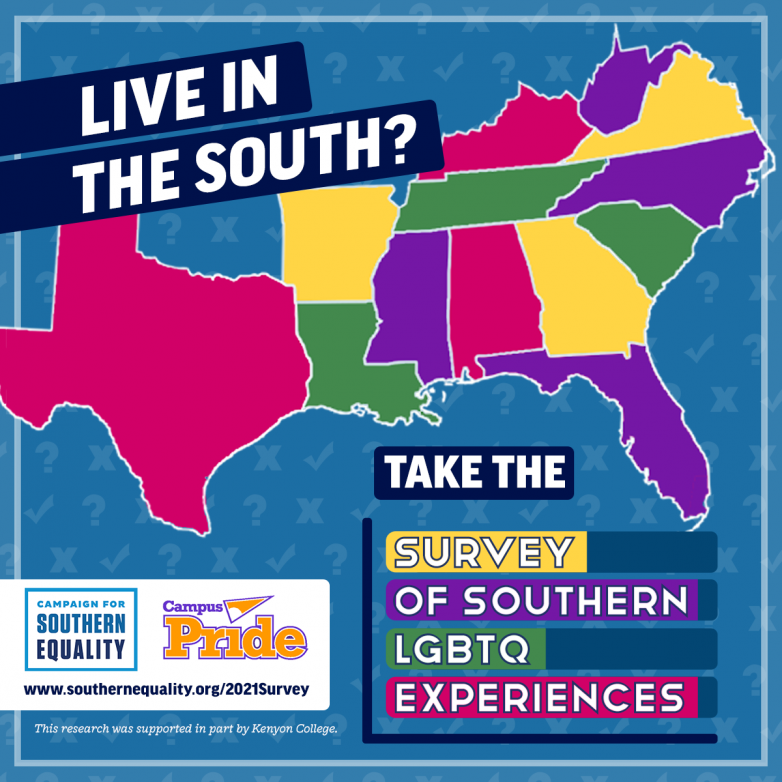 The Campaign for Southern Equality and Campus Pride team up for wide-ranging survey on experiences of LGBTQ people living in the South.

ASHEVILLE, N.C. — Today the Campaign for Southern Equality (CSE) and Campus Pride announced the launch of the Survey of Southern LGBTQ Experiences, a new in-depth research project dedicated to understanding the experiences, needs, and priorities of LGBTQ people living in the Southern United States.

The survey, which any LGBTQ Southerner over the age of 18 is eligible to take part in (at www.southernequality.org/2021Survey), covers a wide range of areas, including questions about LGBTQ-related policies, experiences with coming out and familial/community support, so-called “conversion therapy,” violence, bullying, discrimination, health care, HIV, substance use, and more.

The survey is the inaugural project of the Southern Equality Research & Policy Center (SERPC), a new program the Campaign for Southern Equality launched earlier this month. SERPC will expand CSE’s capacity to conduct independent research and develop policy recommendations to promote the legal and lived equality of LGBTQ people in the U.S. South.

“While more than one-third of LGBTQ Americans live in the South, studies show that less than ten percent of social research on LGBTQ people focuses on Southerners. Through this survey we hope to build on an emerging body of research that takes a specific look at LGBTQ people in the South and their experiences in families, schools, and public life. By collecting these data we can fill gaps in our collective understanding of the community and tell a richer, more vibrant story about LGBTQ Southerners, including the obstacles they face, the resilience they demonstrate, and the resources they need to live full and healthy lives.”

“A focus area for this Survey is young LGBTQ people, who are at the forefront of one of the most profound shifts in public perception, understanding, and inclusion of LGBTQ people in history. This generation of LGBTQ young people have had experiences unlike many other LGBTQ people, especially LGBTQ people in Southern states, where elected officials and institutions are traditionally more hostile to advances for equality and visibility. It’s vital that we embark on this research project – and that LGBTQ Southerners across the region take the survey – to ensure a deeper understanding of our community.”

Dr. Abigail Bowen, Deputy Director of the SERPC at the Campaign for Southern Equality, said:

“As a Southerner and a researcher, I’m passionate about collecting and exploring data relevant to our community. I encourage every LGBTQ person in the South to take this survey, reflect on their experiences, and share their stories with the Campaign for Southern Equality and Campus Pride. The more people who participate, the better we can understand and prioritize the needs of Southern LGBTQ people of all backgrounds.”

LGBTQ Southerners can take the Survey of Southern LGBTQ Experiences at www.southernequality.org/2021Survey