“Death to Diversity” was written on a banner displayed on our library for people to see, as well as written on posters across campus. As well as white males going up to women saying that it was now “legal to grab them by the pussy”. 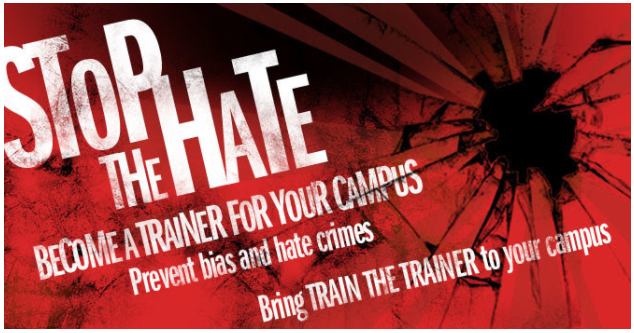 Is your campus prepared to prevent and respond to bias incidents and hate crimes?

In the last month, college campuses have seen an escalation of hate and reports like this one from a Colorado campus.  Now more than ever, campuses need to be prepared to prevent and respond to bias incidents and hate crimes on campus.
Since 2001, the Stop the Hate Train the Trainer program has trained over 2000+ campus officials and students as the nation’s premier campus bias and hate crime prevention program.  Learn more.

BRING STOP THE HATE
TO YOUR CAMPUS

Stop The Hate is an educational initiative of Campus Pride and supports colleges and universities in preventing and combating hate on campus as well as fostering the development of community. The national program serves as the premiere source of anti-hate educational resources for higher education institutions and campus communities.  The program objectives of the educational initiative are: