Sir Ivan of the Peaceman Foundation gives $2800 to Campus Pride for Giving Tuesday Campaign; Asks others to Give Back to LGBTQ Youth and Stand Up Against Bullying 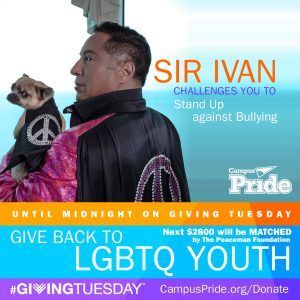 Sir Ivan challenges others to “stand up against bullying” and help Campus Pride reach its $25,000 End of Year fundraising goal to support its anti-bullying prevention efforts and work against bias/hate crimes.

Sir Ivan recently released his new single this week, “Kiss All the Bullies Goodbye,” bringing a strong anti-bullying message. The single and video features Taylor Dayne and is produced by Paul Oakenfold.