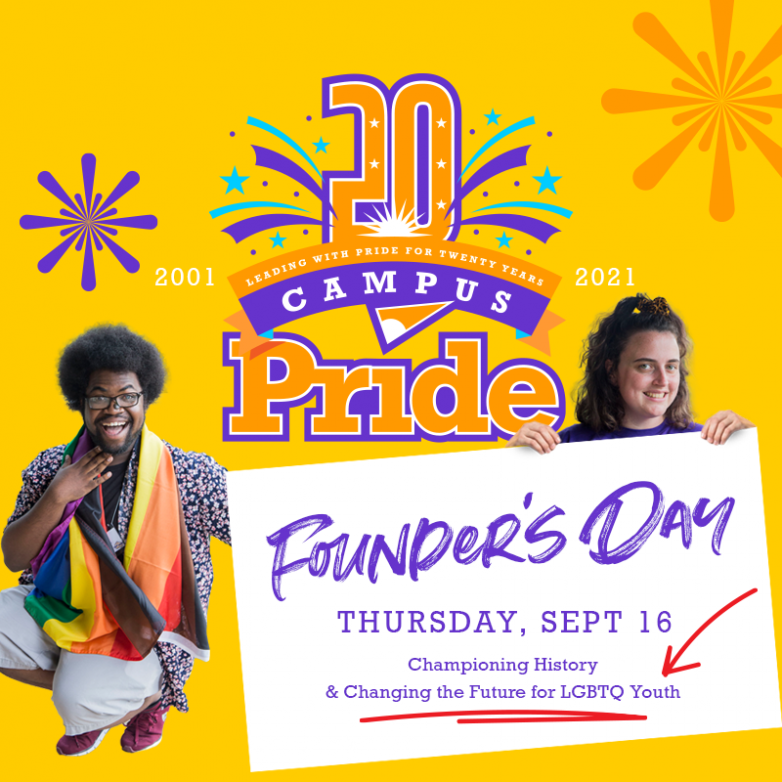 Campus Pride Founder’s Day is celebrated on September 16.  The day recognizes the rich, dynamic history of the organization as a trailblazer for LGBTQ college students – its leaders, volunteers and its programmatic services and initiatives.

In 2006, the organization broadened its outreach efforts and restructured as the current educational non-profit organization Campus Pride with founder and current executive director Shane Windmeyer.  As part of the restructuring process, the Lambda 10 Project for LGBT Fraternity & Sorority Issues became an educational initiative of Campus Pride.

Shane L. Windmeyer, M.S., Ed. is a best-selling author, LGBTQ campus pioneer and civil rights champion. Windmeyer is the creator of the Campus Pride Index (CampusPrideIndex.org), the premier national LGBTQ benchmarking tool for colleges and universities. Released Fall 2006 by Alyson Books, Windmeyer is the author of The Advocate College Guide for LGBT Students, the first-ever college guide profiling the “100 Best LGBT-Friendly Campuses.” He is also the editor of Brotherhood: Gay Life in College Fraternities and co-editor of the books Inspiration for LGBT Students & Allies, Out on Fraternity Row: Personal Accounts of Being Gay in a College Fraternity and Secret Sisters: Stories of Being Lesbian & Bisexual in a College Sorority.

Windmeyer was raised in the rural Midwest on a farm in Hiawatha, Kansas.  Windmeyer is part of the Iowa Tribe. His family is mixed race Mexican, American Indian, and Irish.  Windmeyer attended Emporia State University as a first generation college student and participated in the Upward Bound program for low income, first generation families. He graduated from Emporia State University with a Bachelor’s degree in Communication and then attended Indiana University where he received his Master’s degree in Higher Education and Student Affairs.  He lives in Charlotte, NC with his husband Thomas Feldman. They were legally married in 2015 after twenty years of being together.

Read about our founder & organization history: An Activist Journey: From the Roots of Our Founder to Who We are Today