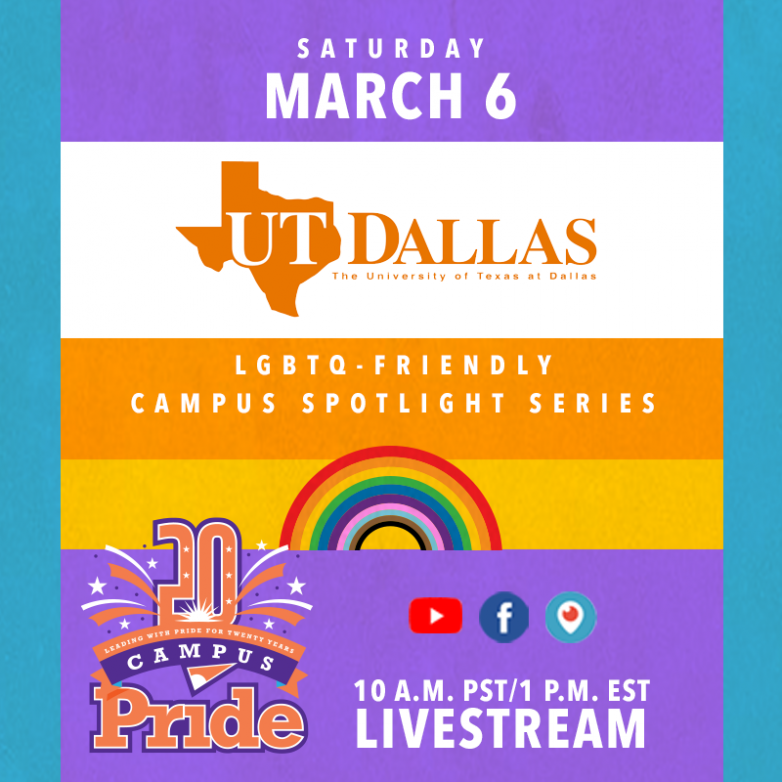 University of Texas at Dallas 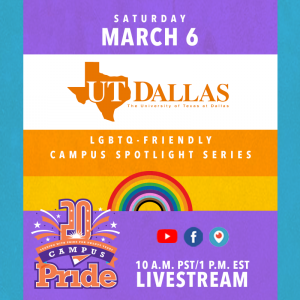 March 6th: Watch Campus Pride Intern Ayla Azim (she/her) interview Matt Winser-Johns (he/him), the Assistant Director of LGBTQ+ Programs at the University of Texas at Dallas Gender Center. Matt’s goal is to increase LGBTQ visibility on campus: “you can’t go across campus without seeing some sort of rainbow!” Some visibility events offered at UT Dallas include Coming Out Week, an LGBTQ+ resource fair, and Transgender Day of Remembrance. In addition, LGBTQ+ students can participate in a special graduation ceremony called Lavender Graduation. Matt also describes the importance of the Gender Center, which exists in the very middle of campus and exists as an affirming space for students of all identities! He also describes some helpful school policies that can bolster inclusivity, such as the Preferred Name and Gender Marker policy as well as LGBTQ-friendly student housing. In addition, Matt describes the focus on intersectionality on the UT Dallas campus. As a white, gay, cisgender man, Matt recognizes the importance of emphasizing BIPOC voices. Guest speakers on campus include historians on racism in Dallas and activists who fight for black trans women’s rights. Some future goals for Matt and the Gender Center include an LGBTQ Summit, more guest speakers of diverse backgrounds, and distributing LGBTQ resource pamphlets in buildings across campus. Lastly, Matt is excited to continue to grow the Gender Center alongside an expanding student population! When asked what the “queerest” thing is at UT Dallas, Matt explained that many students are “nerdy” and “queer-friendly”! To round out the interview, he described the University of Texas at Dallas experience as “unique, affirming, and queer-tastic!”