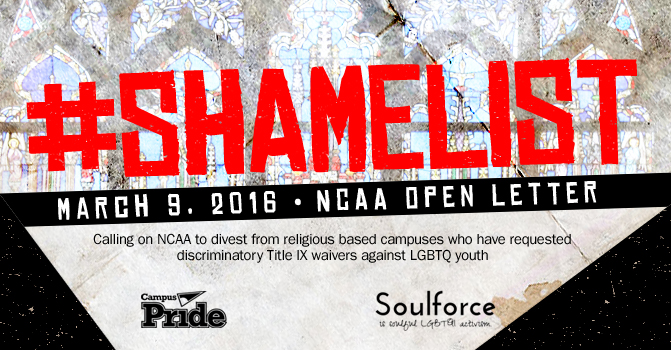 “…….we call upon the NCAA to act on its stated values as an LGBTQ inclusive organization and divest from these schools who are willfully and intentionally creating unsafe environments for LGBTQ students….”

Charlotte, NC, March 9, 2016 – Led by Campus Pride and Soulforce, a coalition of more than 80 lesbian, gay, bisexual, and transgender (LGBTQ), sports, religious and youth advocacy groups signed on to a letter issued publicly today calling on NCAA to divest from all religious-based institutions who have made Title IX requests to discriminate against LGBTQ youth.  The NCAA has long held as core values a commitment to diversity and inclusion of all people regardless of sexual orientation and gender identity.

A list of the organizations can be found online and includes: The Los Angeles LGBT Center, GLAAD, The Tyler Clementi Foundation, Transathlete.com, PFLAG, The National Center for Lesbian Rights and dozens of others.

“Religion-based bigotry is the basis for the vast majority of prejudice and discrimination LGBTQ people face, especially young people,” said Shane Windmeyer, Executive Director of Campus Pride. “The NCAA cannot stand for this outright discrimination among its member institutions and we urge them to take action to ensure an inclusive sports culture that is safe and fair for all athletes, regardless of sexual orientation or gender identity,” Windmeyer concluded.

Campus Pride has kept a record of schools that have made these requests on its “Shame List,” calling out the religion-based bigotry online. There are currently fifty-nine religious-based colleges and universities on the list. The requests grew in response to the Department of Education decision in 2014 to include transgender students under Title IX protections.  The Alliance Defending Freedom and other anti-LGBTQ groups actively solicited these requests from religious-based campuses the last two years.

“As people of faith or spirit, we call upon the NCAA to act on its stated values as an LGBTQ inclusive organization and divest from these schools who are willfully and intentionally creating unsafe environments for LGBTQ students,” said Jordyn Sun, National Campus Organizer at Soulforce. “No athlete should play sports under the specter of fear and discrimination. Instead, these schools should simply follow the law,” concluded Sun.

LGBTQ young people face high rates of harassment and violence, especially transgender youth and LGBTQ youth of color.  The Title IX waiver allows campus administrators to deny transgender students admission, usage of public accommodations, and protections against anti-LGBTQ actions from students and faculty – all based on a student’s gender identity.

“The NCAA has stated that they hope those of all sexual orientations and gender identities speak out against ‘all forms of prejudice targeted toward our LGBTQ student-athletes and colleagues,” said Windmeyer. “Now is the time for the NCAA to put those words into action and only allow campuses that support their values to participate in NCAA sports.”

Campus Pride and Soulforce are partnering during the “March Madness” Men’s & Women’s Basketball tourneys to bring attention to LGBTQ youth athletes discriminated against on these campuses. The actions start with issuing this joint letter on March 9 as part of the #GiveBackIX Campaign and will continue all month long.   Anyone may participate in these actions with Campus Pride and Soulforce by requesting a #GiveBackIX toolkit online.

For media inquires or a copy of the letter sent to NCAA officials, contact Cathy Renna at Target Cue by email at cathy@targetcue.com.

For any questions or more information, please contact Campus Pride at info@campuspride.org or Soulforce at campus@soulforce.org.

Soulforce’s purpose is freedom for lesbian, gay, bisexual and transgender people from religious and political oppression through the practice of relentless nonviolent resistance. For more information, go to Soulforce.org.