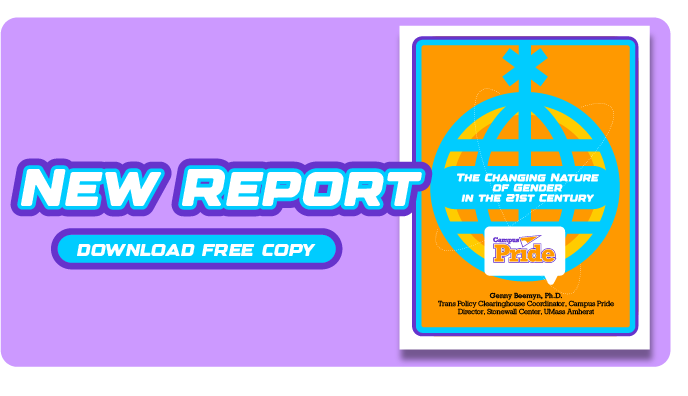 New report analyzed exclusive data from Common App, the largest body of data on the gender identities of incoming college students that has ever been available.

CHARLOTTE, N.C. – In advance of Transgender Day of Remembrance on November 20, Campus Pride today published a new report titled “The Changing Nature of Gender in the 21st Century: How Trans and Nonbinary Students Applying to College Today Self-Identify,” a research project analyzing the largest body of data on the gender identities of incoming college students that has ever been available. The report is produced by Campus Pride and written by Dr. Genny Beemyn (they/them), Coordinator of Campus Pride’s Trans Policy Clearinghouse and Director of the Stonewall Center at UMass Amherst, who was given exclusive access by the Common App to analyze the data on gender identity and pronouns – and the intersections with racial identity and first-generation status – of more than a million students who filled out the application during the Fall 2022 college admissions cycle.

At Campus Pride’s urging over the last decade, the Common App has made significant changes to the online admissions form used by more than 1,000 colleges and universities in the U.S. annually by adding optional questions on gender identity and pronouns as part of an ongoing effort to create a more equitable and inclusive admissions process.

“The number of students openly identifying as trans and nonbinary has grown dramatically in the last few years,” said Beemyn. “As nonbinary people become more visible and gain greater acceptance in society, the number of trans youth, especially nonbinary young people, will most certainly continue to increase.

“For colleges that use the Common App, they will now have information about how many of their incoming students identify their gender and pronouns, as well as the first names they go by, to populate students’ campus records. The goal for all colleges should be that no student is misnamed or misgendered by the institution in areas within its control, including mail, email, and in-person communications; course rosters and advisee lists; housing assignments; online directories; ID cards; and diplomas,” added Beemyn.

“Campus Pride applauds the Common App in its evolution to be more equitable and inclusive in college admissions applications,” said Shane Windmeyer (he/they), Founder, CEO & Executive Director of Campus Pride. “Collecting data around gender identity represents a more holistic, intersectional approach to all students and allows campuses to take responsibility for trans and nonbinary students. At a time when trans youth are being targeted across the country in the most inhumane ways, this new report sends a clear message that trans people deserve recognition, respect – and, most importantly, their inclusion and safety matters. Campus Pride is proud to partner with the Common App and its members to wholeheartedly support these efforts to create a more equitable admissions process.”

Highlights from the report include:

Genny Beemyn is a trans educator, author, speaker, and consultant. They have been the director of the UMass Amherst Stonewall Center since 2006 and the coordinator of Campus Pride’s Trans Policy Clearinghouse since 2012. Genny is also the co-editor of the recently published The SAGE Encyclopedia of Trans Studies and an associate editor of the forthcoming 2nd edition of The SAGE Encyclopedia of LGBTQ Studies. Learn more at www.gennyb.com.

Since 2001, Campus Pride has been the leading national organization building future LGBTQ+ and ally leaders as well as creating safer communities at colleges and universities. The Campus Pride Index annually helps 80,000 people find LGBTQ-inclusive colleges and universities. In addition, the organization has specifically tailored programs and resources to support LGBTQ+ youth and campus communities. Learn more at www.CampusPride.org.