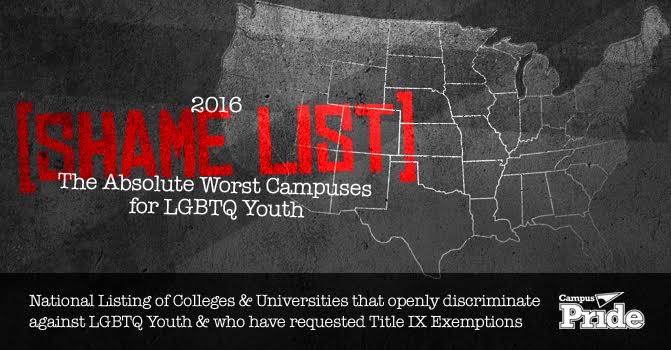 102 campuses documented with anti-LGBTQ policies and cited as “dangerous”

(Charlotte, NC – August 29, 2016) Campus Pride today releases its 2016 “Shame List,” highlighting for the first time a national list of “The Absolute Worst Campuses for LGBTQ Youth.” The national listing includes 102 campuses that openly discriminate against LGBTQ youth in policies, programs and practices as documented on the site listing.   Find the detailed list online at Campuspride.org/worstlist

“Most people are shocked when they learn that there are college campuses still today that openly discriminate against LGBTQ youth. It is an unspoken secret in higher education, how they use religion as a tool for cowardice and discrimination,” said Shane Windmeyer, Executive Director of Campus Pride. “This lists uncovers the religion-based bigotry that is harmful and perpetuated against LGBTQ youth on these campuses,” continued Windmeyer.

“I attended Westmont College in California. While they have not applied for a Title IX waiver, it is clear that their past and current policies and practices are anti-LGBTQ,” said Donald Scherschligt, a Campus Organizer working on this project with Campus Pride. “Nobody should have to live my experience. I hope this listing will help colleges like Westmont realize the future is one of inclusion, especially within higher education. We need to call out these shameful acts.”

Since then the United States Department of Education has published online the letters of campuses related to Title IX exemptions.   Campus Pride spent the last six months compiling a database and researching all public records related to anti-LGBTQ policies, programs and practices at these campuses. The criterion to be the “absolute worst” campus includes either of the following: 1) Received and/or applied for a Title IX exemption to discriminate against LGBTQ youth and/or 2) Demonstrated past history and track record of anti-LGBTQ actions, programs and practices.

“Ultimately these campuses are dangerous for vulnerable LGBTQ youth and others. All families and youth deserve to know this information – and so do corporations who do business with these campuses – from those who hire and recruit, vendors who contract foodservice, sell books, make donations and in any other way provides goods or services to a college or university,” Windmeyer said.

This is the first-time Campus Pride has released a listing of the worst anti-LGBTQ campuses across the country. Every year Campus Pride releases a “Best of the Best” listing highlighting college campuses with the most inclusive LGBTQ-friendly policies, programs and practices. The 2016 Best of the Best list can be found online at Campuspride.org/2020bestofthebest. The full listing of 250+ LGBTQ-friendly campuses can be found online at CampusPrideIndex.org

“If your values and religious belief system include bigotry or discrimination toward any group of people, put it on your Admission brochure. Otherwise Campus Pride will do it for you,” Windmeyer concluded.

A detailed Shame List can be found online at Campuspride.org/worstlist   The listing will be updated annually. Any questions, please email info@campuspride.org