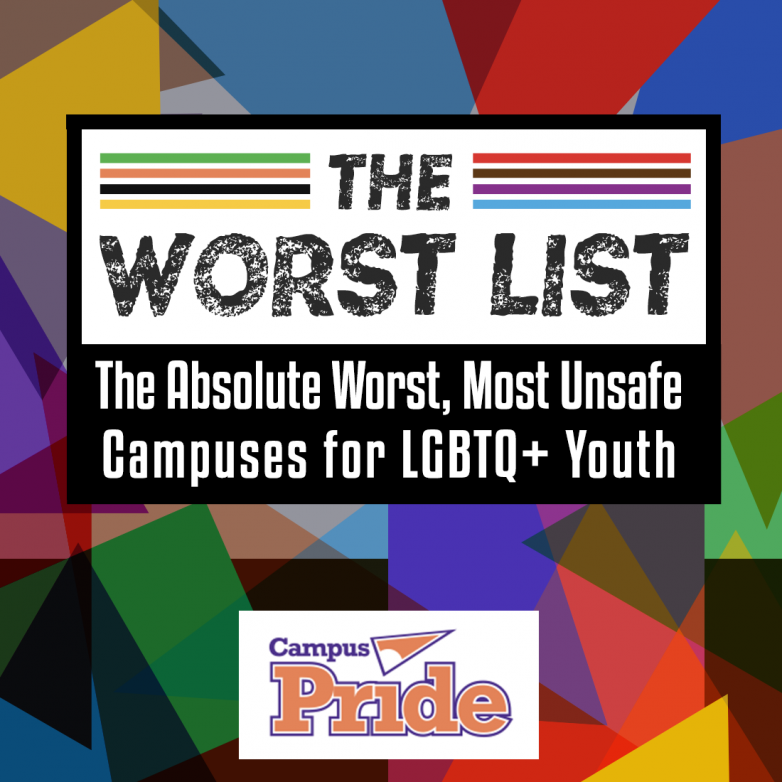 13 Campuses were added to Annual Listing,

CHARLOTTE, North Carolina — Campus Pride, today released The Worst List documenting the “Absolute Worst, Most Unsafe Campuses for LGBTQ+ Youth.” The Worst List is an annual listing of colleges and universities that have chosen to openly discriminate against LGBTQ+ students, faculty and staff, and/or have requested Title IX exemptions to perpetuate the harms of religion-based bigotry.  View Campus Pride’s 2022 Worst List

Amidst continued assaults on LGBTQ+ rights and identity aimed at LGBTQ+ youth, this year’s update adds 13 new campuses to The Worst List and an exhaustive update to nearly two-thirds of the listed campuses and their anti-LGBTQ actions, bringing the total number of Worst List institutions to 193.

“Campus Pride envisions campuses and a society free of anti-LGBTQ+ prejudice, bigotry, and hate,” said Shane Windmeyer, Founder, CEO and Executive Director of Campus Pride. “The growing anti-LGBTQ+ attacks on youth across the country makes the release of this year’s ‘Worst List” even more crucial and timely, shining a harsh spotlight on the religion-based bias, bigotry and discrimination happening on these campuses.”

“All students deserve a college experience where they are welcomed and fully embraced to live, learn and grow – including LGBTQ+ students. The Worst List campuses are unsafe, unwelcoming – the absolute worst. All youth and families should be warned and fully aware that these 193 campuses on the Worst List openly discriminate and perpetuate harm.” continued Windmeyer.

To appear on The Worst List, a campus 1) applied for and/or received a Title IX exemption to discriminate against LGBTQ+ students, and/or 2) demonstrated a past history of anti-LGBTQ+ actions, programs and practices. Of this year’s 13 new entries to the list, three were added due to a request for new Title IX exemptions allowing open discrimination toward LGBTQ+ people and five were added because they chose not to uphold Title IX protections toward any student – including LGBTQ+ students – by refusing federal funding. Five others were added due to reports of anti-LGBTQ+ campus handbook policies, students reporting anti-LGBTQ+ incidents to Campus Pride’s Report It Form, and/or published news articles.

Trends in the data listed for the new and previously listed campuses this year on the Worst List illustrate “emboldened anti-LGBTQ actions” according to Campus Pride. Nearly two-thirds of the campuses on the Worst List had updates from the year prior with more, expanded anti-LGBTQ+ actions, reports, documentation and/or public records available. Largely these were due to anti-LGBTQ+ updates to campus handbooks and/or codes of conduct policies listed in campus documents available online. 21 of the Worst List campuses this year had anti-LGBTQ actions reported through various news articles and seven campuses had moved from a pending status to receiving a Title IX religious exemption from the U.S. Department of Education (DoEd) to openly discriminate against LGBTQ+ people. Other campuses chose not to uphold any Title IX protections by refusing federal funding, and two requested from the DoEda reaffirmation of their Title IX religious exemption status.

This year the Worst List once again named  Brigham Young University (BYU) in Utah, Seattle Pacific University (SPU) in Washington and Yeshiva University in New York. These campuses illustrate the necessity for the Worst List and are striking examples of the anti-LGBTQ actions that students face at these colleges and universities. BYU has earned its reputation as a hotbed of bigotry, spending 2022 cracking down against pro-civil rights protests and removing some 5,000 Allyship and Activism Resource Guides set to be distributed to incoming freshmen. Recently, the BYU athletics department came under fire for their acceptance of a fan verbally abusing a visiting Duke volleyball player, waiting until a national outcry before banning their fan from future games. Meanwhile, SPU’s 2022 employment policy requires employees to “refrain from sexual behavior that is inconsistent with the University’s understanding of Biblical standards, including same-sex sexual activity.” In response to the school’s anti-LGBTQ+ discrimination, graduating students handed pride flags to the interim president as they crossed the stage and received their diplomas.  Last week, Yeshiva University filed an emergency request with the U.S. Supreme Court seeking to block a court order requiring the university to recognize an LGBTQ+ student organization on campus. The campus argues against its LGBTQ+ students having the right to have a recognized student organization stating that the lower court decision has an “unprecedented” intrusion into the university’s religious beliefs and a violation of Yeshiva’s First Amendment rights.

“It’s critical that we boldly call out and push back on schools with anti-LGBTQ+ policies at every level of community, and The Worst List shines a national light on these colleges and universities that are harming LGBTQ+ students and creating on-campus climates that are dangerous and oppressive,” said Chloe Guillot, a 2022 graduate and current Masters of Divinity student at Seattle Pacific University. “At Seattle Pacific University, students like me have been organizing for years against an administration determined to marginalize queer voices and weaponize power to further anti-LGBTQ+ discrimination on a campus that is overwhelmingly demanding change. It’s important that people see what’s happening at Seattle Pacific University and other schools on Campus Pride’s Worst List so we can come together, identify and name transgressions, and take action to pave the way to a better future where LGBTQ+ students and employees are safe on every campus.”

The full 2022 Worst List, which includes the 193 campuses along with documentation, can be found online at CampusPride.org/WorstList. Since December 2015, the listing has been updated annually with Title IX exemptions and anti-LGBTQ actions and reports..