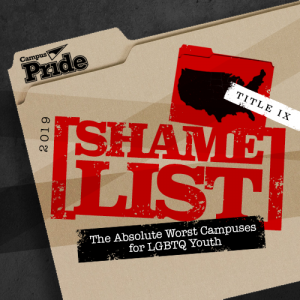 Among the 150 campuses in 2019, there are colleges and universities also listed for specific acts of discrimination against LGBTQ students. Find the Shame List with the 150 college names and supporting documentation online at CampusPride.org/ShameList

“Releasing the Shame List during Easter, a season where religion is celebrated, will hopefully create religious dialogue about falsely using any set of beliefs as a weapon to continue legally harassing, harming and creating unsafe places for LGBTQ students,”said Shane Windmeyer, Executive Director of Campus Pride.

The Shame List was first created in December of 2015 as a way of exposing colleges and universities who secretly had received or applied for Title IX religious exemptions to discriminate against LGBTQ youth, particularly transgender college students.

Since it’s first release in December of 2015, the list has been updated annually and has grown substantially with each update. The 2019 Shame List has named 150 institutions.  113 have received Title IX religious exemptions to openly discriminate toward LGBTQ youth and 2 have pending applications. The remaining 35 campuses have a demonstrated past history of anti-LGBTQ actions, programs and practices.   Compared to 2018, the 2019 Shame List added 11 new campuses as well as updated the status of 25 previously listed campuses who received a Title IX religious exemption within the year.

“We must call out these 150 campuses on the Shame List who choose to create unsafe campus climates and discriminate with Title IX exemptions. We must also recognize that there are many Christian people and faith-based college campuses that openly accept and create safe spaces for LGBTQ youth.” Windmeyer said.

In releasing the 2019 “Shame List,” Campus Pride noted a “troubling change” in Title IX exemption process which will negatively impact a student and/or parent trying to learn how LGBTQ people will be treated on campus – or if they are even allowed to be on campus.  Through the Title IX letters and on the Department of Education (DOE) website, religious institutions are being encouraged not to apply for Title IX religious exemptions. The Trump Administration DOE letters share that the exemption process is merely an ‘assurance’ and is not needed for an institution in advance of claiming a religious exemption.

The February 2018 Department of Education response letter to Arlington Baptist University states: “Primarily, the written ‘request’ for exemption from an institution is a request for assurance from OCR of exemptions to certain sections of the regulation. Religious institutions that have neither sought nor received prior written acknowledgement from OCR may still invoke their exemption after OCR receives a Title IX complaint.”

Campus Pride has conducted a review of the websites of religious campuses. Many of these sites are not clear – or do not have online their policies or actions to enforce anti-LGBTQ Biblical teachings.

“When colleges apply for a Title IX religious exemption, we at least know where they stand via their request letters.  Now, if a college does not apply, we have no knowledge at all – or at best, we may infer from ambiguous Biblical scriptures on the campus website with no information as to how the campus treats LGBTQ students,” Windmeyer said.

“Religious campuses have the responsibility to share openly on their websites and admission materials their anti-LGBTQ beliefs and how they treat LGBTQ students.  Otherwise, Campus Pride will continue creating resources like the Shame List until they do.”

The 2019 Shame List can be found online at CampusPride.org/ShameList. For more information, please email info@campuspride.org or call 704-277-6710 ext. 0.