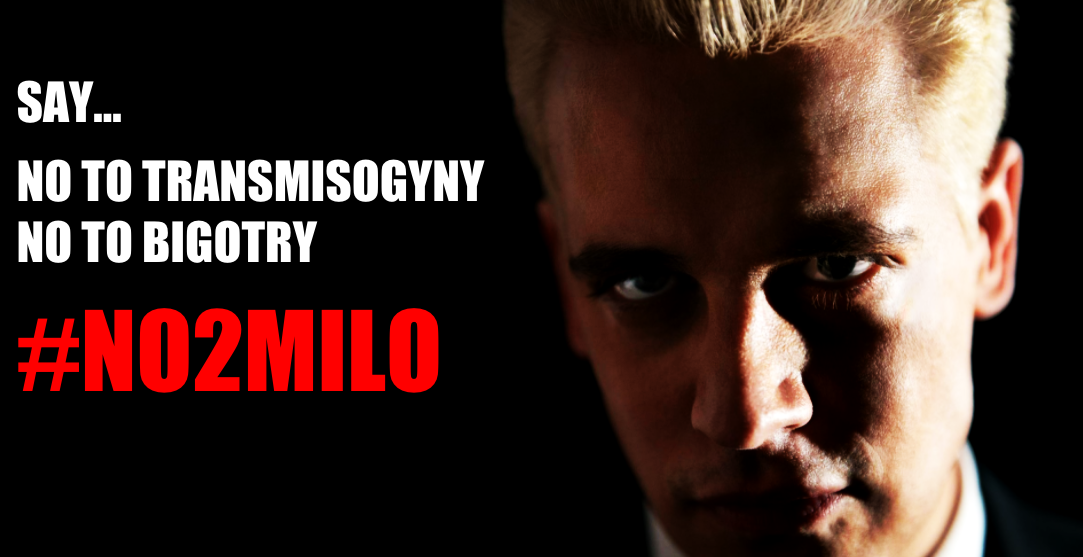 It is time to draw the line.

“Safety is in jeopardy for campuses that allow Milo to come speak and use his hateful bigotry to target any student,” said Shane Windmeyer, Executive Director of Campus Pride. “Milo has no place on a college campus — and if Milo is allowed to speak, there should be clear restrictions in the entertainment contract that do not permit him to harass or target any student or faculty member by name or photograph.  We must hold college administrators accountable for the learning environment that they allow to persist negatively impacting trans lives with such rash ignorance.”

When Breitbart editor Milo Yiannopoulos spoke at a Wisconsin university in December, he used the opportunity to harass a transgender woman who was recently a student at the school. According to a local report, Yiannopoulos “named and showed a picture of the student to his audience, and accused the student of being a man trying to find his way into women’s bathrooms.”

Here is a transcript of what Yiannopoulos said about the student:

“I’ll tell you one UW-Milwaukee student that does not need to man up … Have any of you come into contact with this person? … This quote unquote nonbinary trans woman forced his way into the women’s locker rooms this year … I see you don’t even read your own student media. He got into the women’s room the way liberals always operate, using the government and the courts to weasel their way where they don’t belong. In this case he made a Title IX complaint. Title IX is a set of rules to protect women on campus effectively. It’s couched in the language of equality, but it’s really about women, which under normal circumstances would be fine, except for how it’s implemented. Now it is used to put men in to women’s bathrooms. I have known some passing trannies in my life. Trannies — you’re not allowed to say that. I’ve known some passing trannies, which is to say transgender people who pass as the gender they would like to be considered.”

Yiannopoulos added, “The way you know he’s failed is I can still bang him.” The student, who was in the audience, later described the experience of being “frozen in total terror” that Yiannopoulos had incited “the mob of the room against me.”

Twitter banned Yiannopoulos in July for what the organization described as “participating in or inciting targeted abuse of individuals.” The ban was widely understood as a reaction to the harassment campaign Yiannopoulos led against African-American actress Leslie Jones. This approach can be traced back to “Gamergate,” where conspiracy theorists engaged in sustained harassment of women, including directing threats of violence against them. Yiannopoulos was a key figure in that as well.

Colleges are rightfully reluctant to ban speakers based on their viewpoint. But they should not shy away from taking a stand against people with a lengthy track record of harassment, especially those who have demonstrated a willingness to harass students. The exchange of ideas on campus is meant to be rooted in mutual respect. Colleges do not have to protect students from ideas, but they must take a stand to protect them from unwanted and foreseeable harassment.

Colleges have a simple way to prevent Yiannopoulos from harassing students on campus: They should require him to contractually agree to avoid such behavior before they permit him to speak on campus. If Yiannopoulos is truly interested in participating in an exchange of ideas, he should have no trouble agreeing to this. Campuses would also be doing their due diligence to protect their status as an open forum.

Learn more about what your campus can do to “Stop Milo from Coming to your Campus” and take action by signing the Media Matters petition.