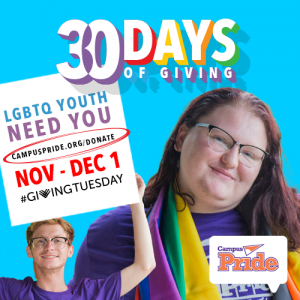 GivingTuesday is a global generosity movement, unleashing the power of people and organizations to transform their communities and their world. GivingTuesday will kick off the generosity season this year by inspiring people to give back on December 1, 2020, and throughout the year.

Campus Pride is participating in GivingTuesday to continue providing necessary services to LGBTQ young people, who are at an increased risk of experiencing isolation, anxiety, depression, and other mental health issues during the coronavirus pandemic. This GivingTuesday, Campus Pride hopes to raise $20,000 in individual donations to help offset the more than $100,000 in losses we incurred during this past year due to cancelled in-person events and programming.

“GivingTuesday is a critical fundraising campaign for Campus Pride,” said Shane Windmeyer, Executive Director of Campus Pride. “The money we raise in the month leading up to GivingTuesday helps to fund our organization and offer LGBTQ young people leadership skills through a community of their peers. With COVID-19 having a significant impact on Campus Pride’s operations, this year’s GivingTuesday campaign is more important than ever.”

GivingTuesday was launched in 2012 as a simple idea: to create a day that encourages people to do good. Over the past nine years, this idea has grown into a global movement that inspires hundreds of millions of people to give, collaborate, and celebrate generosity.

People demonstrate generosity in many ways on GivingTuesday. Whether it’s helping a neighbor or stranger out, showing up for an issue or people we care about, or giving to causes we care about, every act of generosity counts. GivingTuesday has raised billions of dollars for critical causes around the world and gets 21 billion impressions on social media from people and organizations speaking up for the causes that matter to them and encouraging others to get involved in their communities.

“GivingTuesday inspires people all around the world to embrace their power to drive progress around the causes they care about, not just on one day but throughout the year,” said Asha Curran, GivingTuesday’s CEO, and co-founder. “With country and community leaders, millions of organizations, and countless givers of all kinds, GivingTuesday is creating a shared space where we can see the radical implications of a more generous world.”

Those who are interested in joining Campus Pride’s GivingTuesday initiative can visit www.campuspride.org/donate.

Campus Pride represents the leading national nonprofit 501(c)(3) organization for student leaders and campus groups working to create a safer college environment for LGBTQ students. The organization is a volunteer-driven network “for” and “by” student leaders. The primary objective of Campus Pride is to develop necessary resources, programs and services to support LGBTQ and ally students on college campuses across the United States.

Founded in the Fall of 2001 and launched a year later in October of 2002, Campus Pride started as an online community and resource clearinghouse under the name Campus PrideNet.  The original founding partners were M. Chad Wilson, Sarah E. Holmes & Shane L. Windmeyer. In 2006, the organization broadened its outreach efforts and restructured as the current educational non-profit organization Campus Pride.  As part of the restructuring process, the Lambda 10 Project for LGBT Fraternity & Sorority Issues became an educational initiative of Campus Pride.  The executive director is national LGBTQ civil rights leader and campus pioneer Shane L. Windmeyer.

GivingTuesday is a global generosity movement unleashing the power of people and organizations to transform their communities and the world. GivingTuesday was created in 2012 as a simple idea: a day that encourages people to do good. Over the past eight years, it has grown into a global movement that inspires hundreds of millions of people to give, collaborate, and celebrate generosity.

Whether it’s making someone smile, helping a neighbor or stranger out, showing up for an issue or people we care about, or giving some of what we have to those who need our help, every act of generosity counts and everyone has something to give. GivingTuesday strives to build a world in which the catalytic power of generosity is at the heart of the society we build together, unlocking dignity, opportunity and equity around the globe.