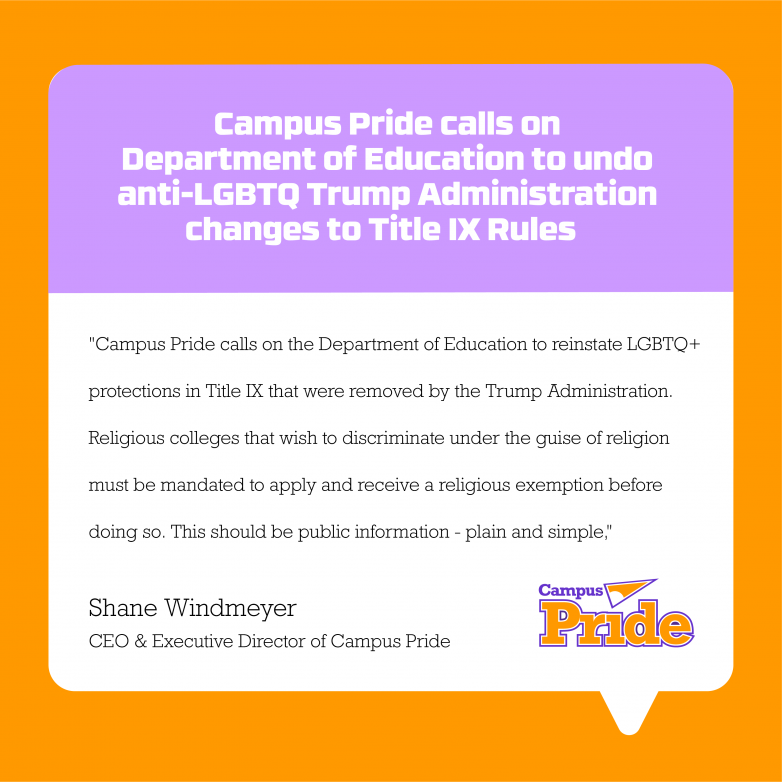 Campus Pride calls on Department of Education to clarify LGBTQ protections under Title IX and undo Trump Administration changes to the Title IX Rules that allowed for increased discrimination toward LGBTQ students.

“Campus Pride calls on the Department of Education to reinstate LGBTQ+ protections in Title IX that were removed by the Trump Administration.  Religious colleges that wish to discriminate under the guise of religion must be mandated to apply and receive a religious exemption before doing so. This should be public information – plain and simple,” said Shane Windmeyer, CEO & Executive Director of Campus Pride.

During the four years of the Trump Administration, the Department of Education implemented changes to the Title IX rule that placed students at greater risk of experiencing sex discrimination from institutions claiming religious exemptions, and with less transparency.

To date, 2022 has seen a high number of anti-LGBTQ+ statewide bills targeting students. In light of this reality, and in line with the U.S. Supreme Court’s decisions in Bostock, and Price Waterhouse, and other relevant federal court decisions, the Department’s Title IX regulations should make clear that discrimination “on the basis of sex” includes discrimination based on sexual orientation, gender identity, transgender status, and sex.

In addition, the Trump Administration in 2020 allowed more institutions to claim a religious exemption and discriminate against students on the basis of sex, with less transparency. First, the changes made with the 2020 Title IX sexual harassment rule explicitly assures institutions that they need not provide advance notice to the Department—and thereby, to students, families, and the public—of their intention to rely on the religious exemption from Title IX in particular contexts. This change enables important information to be obscured from students and their families about the risks of sex discrimination at such institutions, including unequal treatment for women and girls, pregnant or parenting students, students who access or attempt to access birth control or abortion, and LGBTQI+ students, who are already especially vulnerable to discrimination. Moreover, allowing schools to not disclose their religious exemption is inconsistent with the Title IX rule that requires recipients to provide notice of their nondiscrimination policies. A second, separate 2020 rule making added sweeping new criteria broadening the category of institutions eligible for the religious exemption, which expands this already-broad exemption even farther beyond the statutory terms and OCR’s prior, longstanding interpretation. The Department should undo this change and give the religious exemption a narrow interpretation to ensure fewer institutions are discriminating against students and to effectuate Title IX’s remedial purpose.

Campus Pride recently signed on to a letter with other national advocacy organizations requesting these Title IX clarifications and changes along with other recommendations related to sexual harassment. Read the full letter.