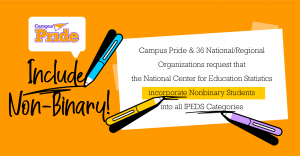 A letter from Campus Pride on behalf of the signatories was sent to the U.S. Department of Education Office of Postsecondary Education (OPE), which has oversight of NCES. Public comment was also filed with the DOE online on behalf of the coalition. Read the full letter at campuspride.org/IPEDSLetter.

“Nonbinary students need to be included in all gender breakdowns so that their experiences, which are often very different from female and male students, can be recognized and fully accounted for in order to ensure a safe, inclusive learning environment. The value of nonbinary inclusion should outweigh any added reporting burden on colleges,” says the letter.

In addition, Campus Pride and other signatories cite the fact that trans and nonbinary populations have increased by three-fold in the last five years, according to the American College Health Association’s National College Health Assessment. Nonbinary students make up the majority of the increased records.

The letter further states: “Expecting all colleges to collect and report data on their nonbinary students will require institutions to acknowledge this population, provide more accurate information, and recognize that gender is not a binary. Obtaining and releasing data on nonbinary students would be an important step in ending the invisibility and marginalization of this group in higher education.”

The signatories hope that this change will lead colleges to provide more support to nonbinary students and work to eliminate institutional gender binaries, such as offering gender-inclusive restroom and housing options and more inclusive student documentation.

Dr. Genny Beemyn, director of Campus Pride’s Trans Policy Clearinghouse, led the effort on behalf of the organization. They also work as the director of The Stonewall Center at the University of Massachusetts Amherst. For more information about the proposal, contact tpc@campuspride.org.