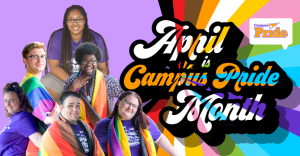 June is Pride Month, but colleges and universities celebrate Campus Pride Month in April since their students leave campus during the summer months. Across the United States, LGBTQ college students and allies planned events and showed their support for the LGBTQ community on their campuses. To learn more, check out our previous blog about Campus Pride Month.

The University of North Carolina at Chapel Hill

The University of North Carolina’s theme for Campus Pride Month was “Imagine Liberation.” They hosted a week of events, which included writing letters to LGBTQ youth and a conversation with Adrienne Maree Brown.

Dickinson College hosted its very first Campus Pride Week in 2022. Their roster of events included a Pride Fest, poetry slam and workshops on topics like LGBTQ activism and navigating the workplace as an LGBTQ person.

Dickinson's Pride Week kicks off with Pride Fest on Saturday, April 2. Learn more about the events and activities scheduled for this weeklong celebration: https://t.co/DlrNTEZc5g pic.twitter.com/BpKGKrTU67

The University of New Hampshire hosted a month full of events for Campus Pride Month. Alliance, UNH’s primary LGBTQ student group, put together a calendar that included a movie night and bingo night. They also hosted critical discussions on topics including healthy queer relationships, hookup culture and coming out in the workplace.

Endicott College hosted Campus Pride Month events for its student body to “embrace their queerness, flex their allyship and learn what Pride is all about.” Their list of events included drag bingo, an ice cream social and a keynote event with genderqueer author Alex Gino.

Did your campus host any events to celebrate Campus Pride Month this year? We want to hear about it! Share your photos and tag @campuspride with the hashtag #CampusPrideMonth on Instagram and Twitter to be featured.