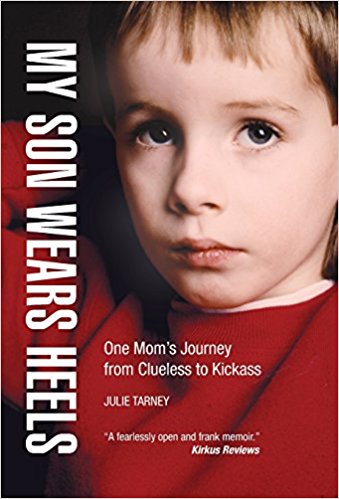 Julie Tarney’s son was different from what she thought of a typical boy from an early age. Harry often dressed in “girl” clothes and expressed that he thought he was a girl. She often had to make decisions about what toys she allowed him to play with and the clothes she let him wear outside the house. Julie wanted Harry to feel like he could be himself but she also wanted to protect him from the bullying she knew could happen to boys who expressed femininity.

Once Harry grew older, he stopped saying that he thought he was a girl. Harry continued dressing differently and one day asked his mother if he could see Rocky Horror. Julie allowed him to go and later looks back on this decision with pride. Harry and his friends dress up and attend the show for many years after. He comes out to his mom as bisexual and then later gay, and Julie is glad that he told her and that he is happy with who he is. When Harry goes to college and begins to do drag, Julie moves to Brooklyn and begins truly living her life the way she wants to, partly inspired by her son being himself all those years.

Julie and Harry’s tale is a mixture of a coming-of-age story and a mother’s story. Julie learns from her son as she watches him grow into a confident person. Harry has a good support system in Julie and she deals with bullying issues as well as she can. When Harry is bullied in elementary school, she shows him that telling teachers what is happening is beneficial. Harry studies abroad in Spain in his sophomore year of high school and deals with displacement and a homophobic Catholic school. Julie does all she can to make sure he is okay and brings him home a semester early.

Julie and Harry are both inspiring in different ways. Julie stands up for her kid no matter what and allows him to be himself instead of stifling his spirit. Later in life, she moves and lives a positive life doing what makes her happy. Harry knows himself very well and expresses his true self at all times. He is driven in academics and his art. My Son Wears Heels is an uplifting story of a mother-son duo that will appeal to parents of LGBTQ children, LGBTQ community members, and anyone who wants to be inspired by a story of being yourself unapologetically.